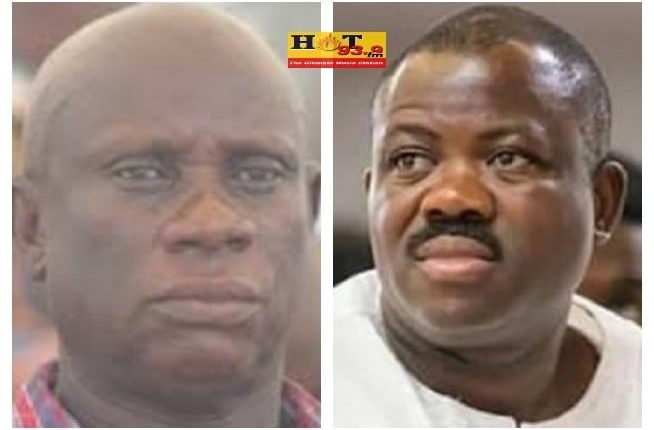 On Sunday, August 2nd, Asiedu Nketia was seen in a viral video clashing with soldiers who in the wake of disturbances that resulted in the sudden demise of one person in Banda about a week ago were dispatched to assist other security agencies to calm matters in the area.

The Military Officers were alleged by Asiedu Nketia to have barred some Ewes in the Bono region from registering at the Banda Assembly.

According to the NDC stalwart, instead of the soldiers discharging their core duties as expected,they are rather supporting the New Patriotic Party (NPP) Parliamentary Candidate to repudiate the agreement signed by the two main political parties.

Speaking in an interview on Socio-political morning show’Maakye’ hosted by Boamah Darko, the deputy chief scribe of the NPP ,Nana Obiri Boahen, in defense of his party, informed that after the death of the victim, the Regional Security had a meeting with representatives of the NPP and the NDC. The meeting birthed an agreement that neither of both parties should be seen bussing or conveying people to the registration centers.

According to Obiri Boahen, the NDC was seen bussing people, contrary to the agreement signed, and that was how the chaos emerged. “If both parties have agreed that no one should bus people why would one decided to breach the agreement?” he asked.

The National Organizer for the National Democratic Congress, Joshua Ahmidu Akramba in reply to the Nana Obiri Boahen on the same morning show, debunked all the claims made by the latter.

Ahmidu Akramba, not denying the fact that there had been an agreement, explicated that the Regional Security, a group of Chiefs, some Members of Parliament and representatives of both the NPP and NDC met and agreed that in order to avoid tension such as the August 2nd incidence; the two political parties must sign a peace treaty.

The treaty indicated what could or could not be done; one of the indications stated that neither of the parties is allowed to dispatch vigilantes to any community. The NDC National Organizer revealed, “George Dankwah of the NPP who dispatched the soldiers to the assembly, together with Nana Obiri Boahen were not part of the agreement.”

He further alleged that the NPP stalwart does not have the accurate facts about what actually caused the pandemonium but only sits in Accra and contracts vigilantes to murder people.

“Nana Obiri Boahen does not have information from the grounds. All that they do is to sit in Accra and contract vigilantes to murder and kill people”. VIDEO:“Reprimand The Students In Viral Video For Insulting Akufo-Addo”—NDC Communicator

10-Year-Old Boy Drowns In Mining Pit Near A School

We Shall Dismiss Your Petition If.. – Supreme Court…

Do You Play Football For free? – Owusu Bempah Replies…

We Shall Dismiss Your Petition If.. – Supreme…

Do You Play Football For free? –…

I Fled Ghana Out Of Fear For My Life –…