In a post sighted by Zionfelix.net, Mr Donkor disclosed how some industry gurus discouraged him by writing him off. 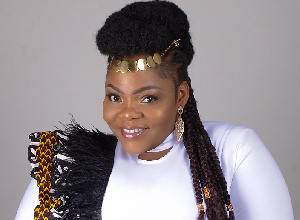 According to him, these people who were not convinced about what he can do predicted that he would waste the potential of his wife.

However, Mr Kofi Donkor said he was encouraged by the husband of Philipa Baafi, Mr Kwame Karikari. He recounted “Dieta, you can do” as the words said to him by Mr Karikari.

Years after dedicating his time to push his wife, the story has been a successful one.

After Celestine Donkor won the Gospel Song of the Year at the 2020 VGMA with her ‘Agbebolo’ song, Mr Donkor has expressed his gratitude to all those who contributed to their success story.

He admitted that the journey has not been easy but God has not let them down. “MY STORY PART I”

I want to express my gratitude to all who, sent messages and all who are genuinely happy for us. I have been reflecting on the happenings at the VGMAs and I am honestly humbled. In 2008, this man here, by name Kwame Karikari( husband of Philipa Baafi) encouraged me to take up this challenge. He said to me “Dieta, you can do it”. Some industry gurus then wrote me off, some said I will waste my wife’s potential. Today I look back and all I see is the hand of God doing His own thing.

“I am humbled by that fact that today I have many partners in this industry not just in Ghana but across the African continent and beyond. I am humbled by the fact that I don’t know it all yet other category A artistes from other Africa nations call to seek my counsel. It has never been easy but God NEVER let us down! Kwame Karikari, you pushed me. Today this is my story. God richly bless you” he wrote on Facebook.