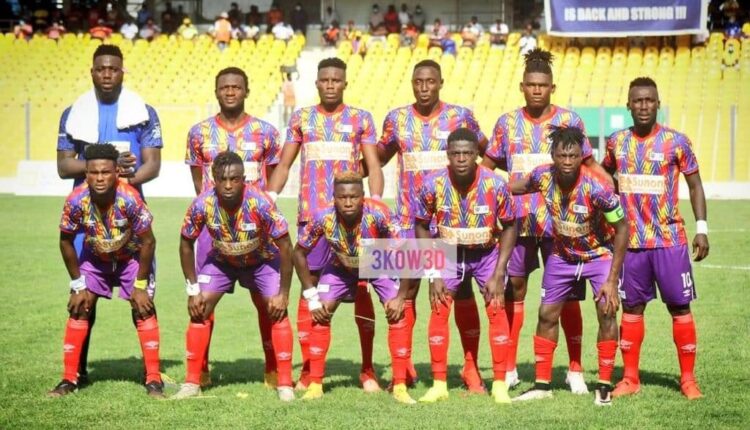 Hearts of Oak played out a goalless draw with Bechem United on their return to the Accra Sports Stadium on Sunday.

With the stadium closed for a month for supposed renovation works, Hearts opted for Cape Coast Stadium to host their home games.

They played two matches in the Central Region and won both including a 2-0 win against Berekum Chelsea in their last match.

Hence, they came into Sunday’s clash full of confidence, expecting victory to continue their rise on the table.

However, Hearts were not clinical and luckily for them, Bechem were wasteful as the game ended with both sides taking a point apiece.

It was Bechem who started well and trouble Hearts defence.

Augustine Okrah failed to work Hearts goalkeeper with a  free-kick but minutes later forced Richmond Ayi into making a decent save.

Kofi Kordzi who scored both goals in the win against Berekum Chelsea was kept quiet as Hearts had only one shot on target in a poor first half.

They returned from the break with sense of purpose. Kwadwo Obeng Jr created space for himself at the edge of the box but his effort was blocked.

Substitute Emmanuel Avornyo skipped past two challenges but his final delivery left a lot to be desired about.

Another great opportunity was missed by Hearts. Suraj Seidu made a powerful run into the box but hit his shot over.

Brave goalkeeping by Mensah prevented Bechem from scoring what would have been the winning goal in the closing stages.

The result is a good one for Bechem who remain in the top four while Hearts are now nine points behind the top spot.

But the Phobians have two outstanding games.