5,000 Chinese ‘Galamseyers’ Were Deported When I Was In Power- Mahama 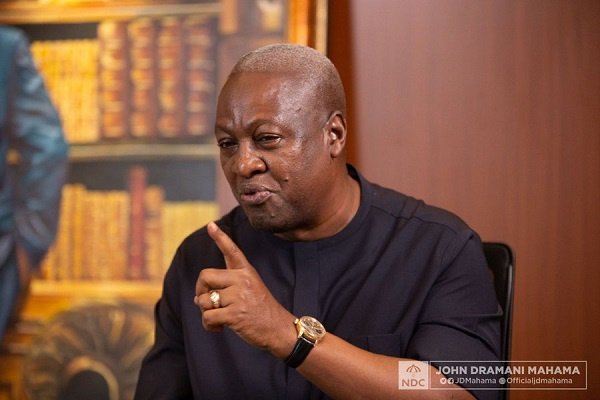 Former President John Dramani Mahama is questioning why President Nana Addo Dankwa Akufo-Addo is unable to show leadership in the fight against illegal mining [galamsey] by cracking the whip on offenders, particularly those from China.

For Mr Mahama, despite the good bilateral relations between Ghana and China, government must ensure that illegalities committed by Chinese nationals derailing Ghana’s galamsey fight must not go unpunished.

“When I was President, we valued the relations with China. But if you are Ghanaian and you go to China and engaged in any illegality, they do not say because of the good relations they will let you go scot-free. You will face the full rigours of the law in China”, the ex-president stressed.

His comments come on the controversies surrounding the return of Chinese galamsey queen, Aisha Huang and whether she was deported or not.

In an interview with Accra-based TV3, John Mahama recounted how he did not hesitate to deport about 5,000 Chinese nationals engaged in illegal mining during his tenure of office to prove his commitment to tackling the menace.

“When I was in office, I faced this same illegal gold mining [issue]. I deported almost 5,000 illegal Chinese miners. I didn’t say because of the good relations we have with Ghana, we should allow them to engage in this illicit activity. We collaborated with the Chinese embassy, and it didn’t destroy our relationship.”

Aisha Huang was arrested a few days ago by National Security operatives for her illegal return to the country following her deportation in September 2018.

Her arrest has left many questioning the government for its commitment to the fight against illegal mining in the country.

But the former President wants sanctions against state officials involved in her return insisting that the government must not shield anyone involved in the return of the Chinese national.

The former president also called out President Akufo-Addo for “failing the fight against the menace.”

President Akufo-Addo in 2017 put his presidency on the line by stating his resolve to fight the galamsey menace.

“I have said in Cabinet, and perhaps this is the first time I am making this public that I am prepared to put my presidency on the line on this matter,” the President said.

Mr. Mahama said President Akufo-Addo should have resigned by now per his own words.

“If we were in some other jurisdiction, he would have resigned by now. By his word, he put his presidency on the line,” he added.