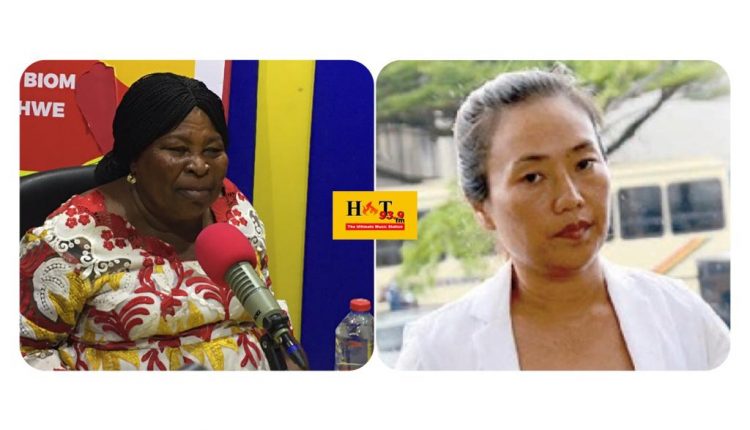 The founder, and leader of the Ghana Freedom Party (GFP) Akua Donkor has vowed to shoot Chinese illegal mining suspect, Aisha Huang with a machine gun when she meets her  over her involvement in illegal small-scale mining activities.

Aisha Huang, appeared in court on Wednesday after being remanded into Police Custody for two weeks when she was re-arrested last month.

Aisha Huang was remanded into Police Custody for the next two weeks as the Accra Circuit Court turned down her request for bail.She will re-appear in court on 27th September 2022

The embattled Chinese ‘galamsey queen’ is being tried on two charges by the state for engaging in sale and purchase of minerals without valid licence and Mining without licence.

Reacting to Aisha Huang’s arrest on Hot 93.9FM’s ‘Dwene Ho Biom’ political talk show hosted by Agya Wusu, Akua Donkor stated angrily that she can’t fathom why an expatriate would have the audacity to come into the country and engage in illegal mining thus she would deal with her severely by shooting her with her(Akua Donkor) own machine gun when she meets her .

” I will shoot Aisha Huang if i meet her…God has blessed us with minerals then we allow a foreigner to come here to destroy them …I can’t sit aloof and watch her destroy our water bodies with her illegal mining…she uses poisonous chemicals that pollutes the water bodies…I will shoot her when we meet “She said on Hot 93.9FM

Disease Outbreak In The Ashanti Region