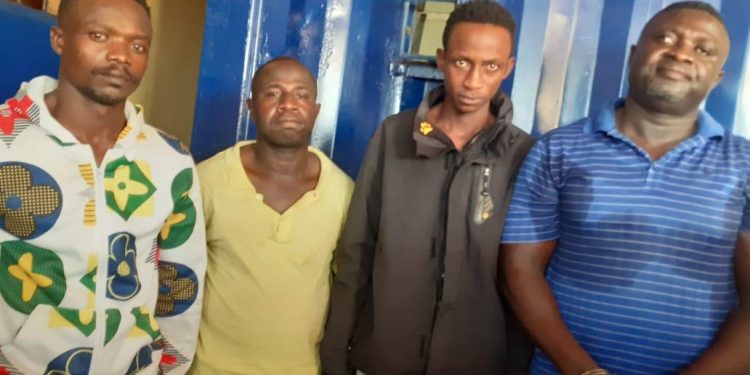 Personnel of the National Security is in the grips of the Ghana Police Service for armed robbery.

The National Security Personnel whose name is given as Nana Yaw Arko led Benjamin Otoo @Dada Joe, Tony Mensah Yedu @ Big Joe, Bismark Asabree@Dagbano who were clad in Police and Military uniform to rob a house at Ajasco Red Top at Kokrobite in Accra.

According to a preliminary investigation by the Ghana Police Service, the three men invaded the rooms of one Ernest Monday and Rebecca Akumine on 18th November 2021 at about 11:25 am.

They were said to have made away with three laptops 1 iPhone 8 plus, three infinix smartphones, 1 techno cammon7, one Bluetooth speaker, one extension board, 3 phone chargers, two laptop chargers and an amount of Ghc 50.00.

After the robbery, the three persons are said to have taken Ernest Monday along with them in an unregistered White pick-up vehicle and dropped him at an unknown location and bolted.

The suspects are said to have been interrogated by the Police and will be arraigned before court.

5 Arrested For Highway Robbery At Ejura