Video: I Started My Medicinal Business With GHC 1 – Millionaire,Tobinco 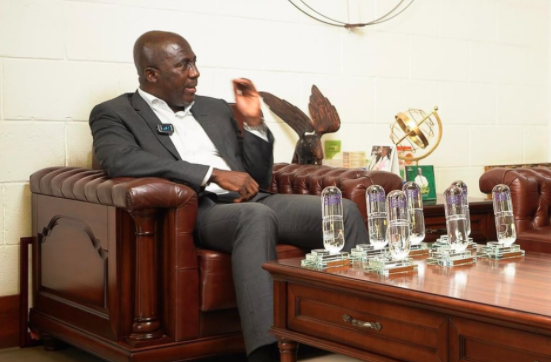 One of the richest businessmen and the CEO of one of the biggest Pharmaceutical companies in Ghana,Tobinco; Mr Samuel Amo Tobbin better known as Tobinco has revealed the amount of money he used in establishing his medicinal business.
Speaking in an exclusive interview with Zionfelix, the business Mogul said he started selling medicine with GHC1 after being introduced into the business by a Muslim man he met along the line in 1984 at the age of 20.
“I was born into a poor family of 11… i was hawking on the streets to pay for his school fees and cater for myself due to the financial status of my family….but in 1984, i started my business with GHC1 after meeting a muslim man who introduced me into selling of medicine…I was 20years then”.Tobinco told Zionfelix
According to him, he eventually started buying stocks from Ernest Chemist to distribute drugs where he made good money for himself .In 1989, he deserted the distribution of drugs and travelled to Tokyo to hustle at the age of 25.
In Tokyo, he worked at a cement company with a good salary for five years and returned to Ghana. Back home, he established an electrical shop and a chemical shop that birthed the Tobinco group of Companies which consist of Insurance Saving and loans, Entrance pharmaceutical and research center , Atinka media village , Real estate and many others.
At the just ended 2021 Ghana Pharma Awards, Tobinco topped the night by walking away with seven awards which include the CEO of the Year Award.
Watch the interview below
0
Share

I Am Committed To Corruption Fight – Akufo-Addo

Prices Of Fuel To Go Up Again – NPA