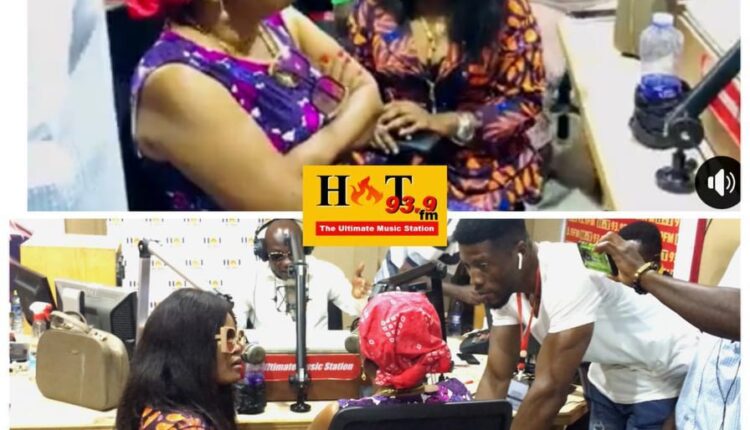 The feud between the mother of multiple award-winning dancehall artiste, Shatta Wale,Madam Elsie Avemegah better known as Shatta Mama and newest girlfriend of the ‘Love My Thing’ hitmaker , Magdalene Love popularly known as Magluv has finally been settled.

The feud started when Shatta Wale’s mother while speaking in an interview on ‘Ay3 Hu’ social talk show which is hosted by ace broadcaster Nana Ampofo on Accra-based Hot 93.9FM accused Magluv of labelling her a witch to Shatta Wale.

“Magluv told my son that I am a witch and that the cooked rice I use to bring to him he shouldn’t eat it anymore because I have been putting ‘juju’ in it hence he shouldn’t entertain me in his house again”, Shatta Mama angrily alleged to Nana Ampofo

Extremely disdained Shatta Mama accused Magluv of masterminding the breakups between Shatta Wale and his two baby mamas (Michy and Sister)
Reacting to Shatta Mama’s allegations on the same show; ‘Ay3 HU’ on Friday, Magluv  refuted all the allegations levelled against her.
After exchanging words with Shatta Wale’s mother, Magluv then swallowed her pride by indicating that she was not on the show to disrespect Shatta Mama but just wanted the world to know her side of the whole story.
To the chagrin of listeners of the show, Magluv shedding uncontrollable tears  knelt before Shatta Mama and begged for forgiveness.
Speaking in the Ga dialect, Magluv said,” Mummy, please forgive me…Please the sleeping dogs lie…don’t listen to people…those people doesn’t like Shatta Wale…they’re just interested in the downfall of Shatta…Please, don’t let our enemies win over us…I am extremely sorry, please forgive me”.
Accepting Magluv’s plea, Shatta Mama without mincing words also said,”I have no problem with Shatta Wale; i only came here(Hot 93.9FM) to talk about issues bothering me…i thank each and everyone…i have accepted her plea…but if she is just pretending to be remorseful only God knows…i thank you all”.
Watch the video below
0
Share