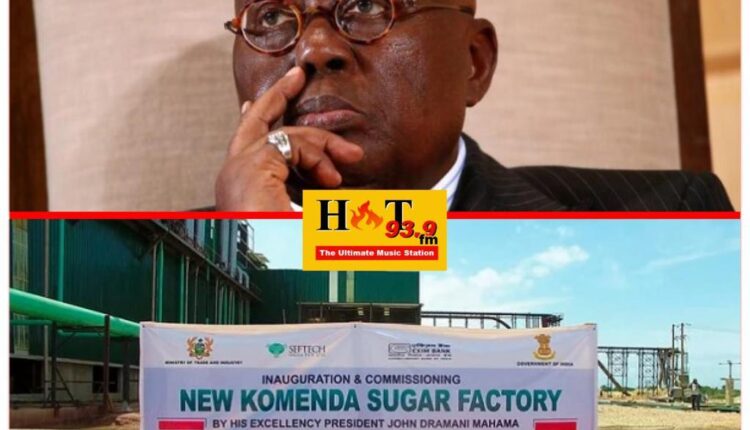 The sugar  producing factory, established in 1964 has been defunct for some years because of some technical problems and setbacks.  From the onset of the factory’s existence, the reason was to produce sugar locally thus reducing importation of sugar. But after its recommissioning by the John Mahama regime,  the factory is still dormant.

Independent sugarcane consultants revealed that they never completed the test which was to be conducted on the Komenda Sugar Factory before the recommissioning in 2016. This came up because of insufficient sugarcane to be used to run the test.

The President, Akufo-Addo, in an interview said the decision taken by his predecessor, John Dramani Mahama, to build the Komenda Sugar factory, without first establishing a sugarcane plantation, betrays every principle of construction.

“It is like building a house, and say you are going to start from the roof before you have a foundation. How does the house get built? The President said.

Former President Mahama responding to the President’s statement on Cape FM on Friday, October 15,2021 said that, “I’m not that foolish to set up a factory and have no plan for the provision of raw materials. I knew what the vision was. It was to get the raw materials first.”

According to the Lawmaker, he does not know what exactly the money was used for or how the sugarcane was planted.  “All  i saw was the Komenda factory which was meant to produce sugar used in producing akpeteshie”, He told Kwabena Owusu.

Mr. Nyarko testified that the sugarcane was planted but was not used for its preliminary purpose as stated.The President,

Video: Let’s Love And Support One Another – Celestine Donkor To Gospel Musicians