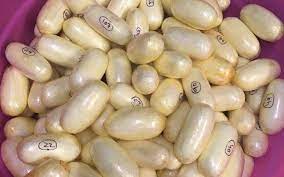 Officers of the Narcotics Control Commission (NACOC) have intercepted substances suspected to be narcotics in separate operations in Accra and Woe in the Volta Region.

The first interception was made at the Kotoka International Airport (KIA), where a 46-year-old woman who was travelling with a whitish substance suspected to be cocaine on her was arrested.

The other was the seizure of 162 sacks of dried leaves suspected to be cannabis after NACOC officers had raided a stash house at Woe, a town near Keta in the Anlo District in the Volta Region.

The arrest made at the KIA last Saturday involved a woman identified as Margret Wolo Maikplay, a Liberian, who was transiting through Ghana aboard an Asky Airline and was to fly to Doha-Bangkok via Qatar Airline.

The suspect was picked up as she went through pre-transit formalities after it was detected that she had 30 thumb-size pellets of a whitish substance concealed under her breasts and in her private parts.

According to NACOC officials, the substance intercepted, weighing 0.36kg, tested positive for cocaine after an initial field test on the day of the arrest

riefing the Daily Graphic on the arrests, the Manager of the Public Affairs and International Relations Department of NACOC, Francis Opoku Amoah, said during an initial interrogation, Ms Maikplay confessed to having inserted some substance in her genitals.