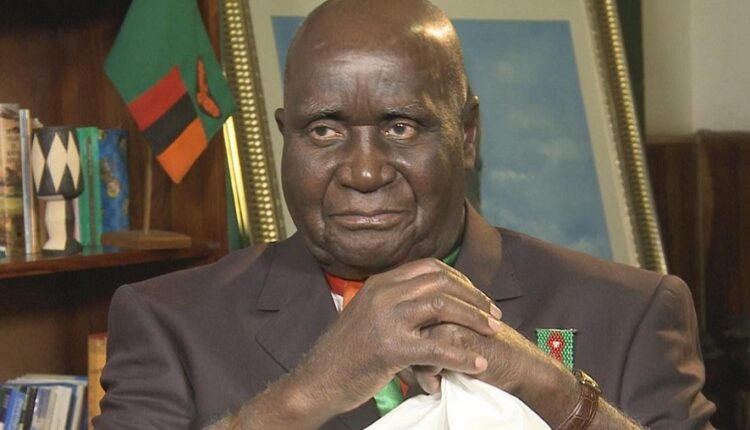 The news of his death comes after his office released a statement Monday to announce he was “unwell” and had been admitted at the Maina Soko Medical Centre in Zambia’s capital city of Lusaka. His aide later disclosed he was being treated for pneumonia.

Kaunda led Zambia to independence in 1964 and served as that country’s president until 1991 after having played a major role in its independence movement that aimed at freeing itself from Rhodesia and white minority rule.

Nickamed “Africa’s Gandhi” for being an advocate for non-violence, Kaunda was born April 28, 1924, in Lubwa, near Chinsali, Northern Rhodesia (now Zambia). His father, who was from Nyasaland (now Malawi), was a schoolteacher; his mother was also a teacher and the first African woman to teach in colonial Zambia.

After completing his secondary education, Kaunda also began to teach, first in colonial Zambia before Tanganyika (now Tanzania) in the middle 1940s. When he returned to Zambia in 1949, he joined the first major anti-colonial organization in Northern Rhodesia (Zambia), the African National Congress (ANC) and in the 1950s assumed the role of Secretary General.

Clashes within the ANC caused it to split, with Kaunda becoming the president of the newly formed Zambian African National Congress. Kaunda skillfully used this position to force the British to abandon plans for a federation of the three central African colonies—Southern Rhodesia, Northern Rhodesia, and Nyasaland which would have placed ultimate power in the hands of a white minority of settlers.

This, coupled with his subsequent imprisonment by the colonial administration made him a hero in the eyes of the Zambian people to the extent that he got elected president of the new United National Independence Party (UNIP), which had been formed in October 1959.

With his skills and influence, the UNIP won the first major elections leading to final decolonization that was held in October 1962. Kaunda would later negotiate additional constitutional advances, and in 1964, the colonial administration granted Zambia its independence with Kaunda as its president.

Until his fall from power in 1991, Kaunda ruled under emergency powers, banning all parties except his. Thus, most of his years of leadership were observed under a one-party system that ensured that he won the presidency each time an election was held (1978 and 1983) while crushing several attempted coups against him in the early 1980s.

The Zambian economy would later tumble under his watch due to the rising price of oil and a fall in the world price of copper, the withdrawal of foreign aid and investment, as well as, corruption.

Due to international pressure for democracy in Africa and the above concerns, Kaunda declared multiparty elections in 1991, which he lost to his rival Frederick Chiluba of the Movement for Multiparty Democracy (MMD).