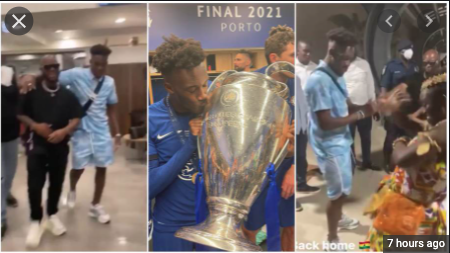 The 20-year-old, born in London to Ghanaian parents touch down in Accra on Monday evening, just three days after Chelsea’s success in Europe.

He was met by top Ghanaian musician and also a Chelsea fan King Promise on his arrival.

Hudson-Odoi is in Ghana for holidays after a long football season in Europe, which saw Chelsea also reach the finals of the FA Cup, which they lost to Daniel Amartey’s Leicester City.

Despite picking England over Ghana for international football, the U-17 FIFA World Cup winner has always shared his love for the West African country.

The Chelsea player will miss Euro 2020 after failing to make manager Gareth Southgate’s 26 man squad for the competition.

Hudson-Odoi enjoyed a relatively better campaign in the just ended season after making 32 appearances in all competitions for the Blues.

Man Who Allegedly Killed And Buried Mother Wanted By Police