2 Arrested For 30-Shops Fire In Kumasi 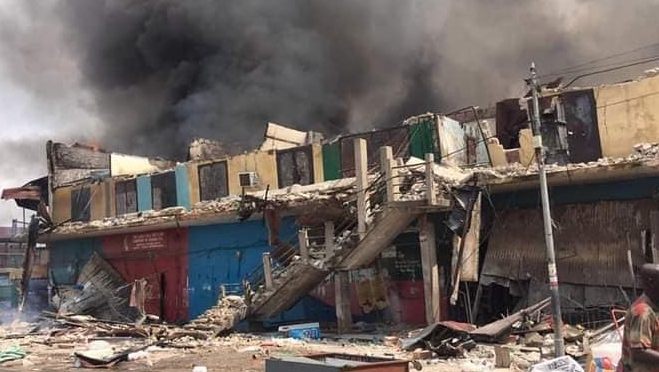 The Zongo District Police Command has arrested two persons suspected to have ignited a fire that razed 30 shops in a storey building at Aboabo station in Kumasi, the Ashanti regional capital.

They are Kofi Gyimah, 37, an electric welder and Paul Akwasi Kwakye, 51, shop owner.

The electric welder whose services was sought by the shop owner to work on his shop in the storey building, according to the Zongo District Police Commander, Chief Superintendent Ameyaw Afriyie who confirmed the arrest to Class News’ regional correspondent Elisha Adarkwah, is said to have allegedly triggered the fire in the process of welding.

They were nowhere to be found when the fire broke out during the operation.

They were, however, arrested by the police when they went to the police station to lodge a report of the fire.

The two are in the police custody assisting investigations.

In all 30 shops out of 60 on the upper floor of the structure were burnt on Sunday morning.

It took the firefighters over five hours to fight the inferno which consumed properties like rubbers, oil, rice among other assorted items amounting to thousands of Ghana cedis.

No casualties were recorded.