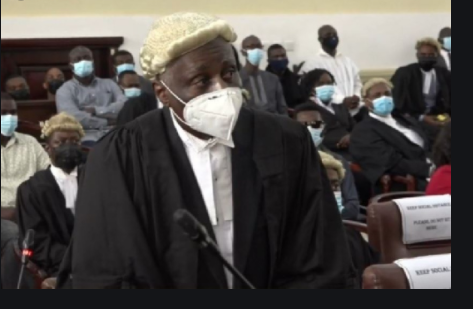 Lead Counsel for the Petitioner in the ongoing hearing of the 2020 Election Petition at the Supreme Court, Tsatsu Tsikata has asked one of the panel Judges to stop harassing the petitioner’s witness.

This was after the Judge after the witness had concluded his cross-examination told the latter that he did not help the petitioner by leaving the Electoral Commission’s strong room because the EC Chair had asked him to go and consult with the Petitioner(John Mahama) ahead of the Presidential result being declared.

“Will it be right to say that by taking contrary instruction from the Chairperson of the First Respondent(EC) granted what you’re saying is true, you did not help the course of the petitioner who had sent you there?

“…then seriously speaking you did not take your training seriously, I want to be clear, you’ve gone to play a particular job, yet instead of playing the particular job that sent you there you take instruction from somebody else then you leave the job? then you did not help the petitioner,” the Judge stated.

Not happy with the comment of the Judge, counsel for the petitioner, Tsatsu Tsikata stood on his feet saying the judge can keep his opinion and asked the Judge not to harass the witness as the latter had answered the questions to the best of his ability.

“It is not my duty to harass him, I know that he had been sent by the petitioner to do a job for him, then somebody tells you to go to the petitioner and consult with him. If the petitioner could do the work he himself would have been there. How am I harassing him.” the Judge asked?

Tsatsu responded: “You are harassing him respectfully because the witness has indicated that the Chairperson who’s the Returning Officer was the person with whom his colleague had the conversation and on the basis of that they were sent to talk to the petitioner and he has given every account of why they thought it fit that both of them should go. So repeatedly when an opinion is being put to him, that is harassment of the witness and that is not allowed.”

The hearing has been adjourned to Wednesday, February 2021.

Rawlings Can Never Be Compared To My Father – Sekou Nkrumah Brags