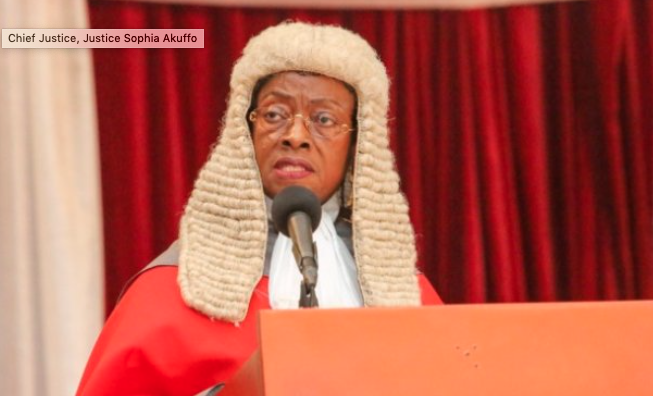 Former Chief Justice of Ghana, Madam Sophia Akuffo, says she is upset about wild accusation by Member of Parliament (MP) for Asawase Muntaka Mubarak that a Supreme Court judge offered to bribe a National Democratic Congress (NDC) MP to vote for Professor Aaron Mike Oquaye during the election of Speaker for Ghana’s 8th Parliament.

The accusation by the MP, according to her, has defamed other innocent judges of the Supreme Court who have built reputation for themselves over the years.

The Asawase MP stated that a very prominent judge contacted an NDC MP and offered an inducement should the person vote in favour of the New Patriotic Party’s Speaker nominee, Prof Oquaye.

According to him, though the judge’s motive was not achieved, the party will probe the issue and take the appropriate steps if necessary.

Mr Muntaka has also assured to assist the apex court with evidence though he is yet to provide any to back his claims.

Subsequently, the Chief Justice, in response, has assured the general public of a probe into the