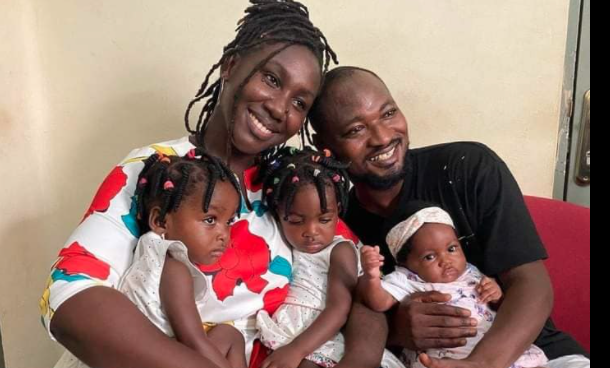 Ama Venessa, the baby mama of Funny Face has granted her first interview after her surprising visit to the comic actor at the Accra psychiatric Hospital.

The actress and video vixen shocked many folks online after photos of her laughing with her baby daddy, Funny Face, and their children in a nice family portrait landed online some hours ago.

After the photos went viral, Ama Venessa has granted an interview to speak about why she paid Funny this visit after all his attacks and threats on her life.

She added that her only reason for coming from Kumasi to see Funny Face at the Accra psychiatry hospital was because she still loves him and believes that their children are a great connection between them.

She told Kofi Adomah that he was not too happy when they arrived at the hospital initially but after listening to the ‘Kasoa Trotro’ show creator speak for a while, she realized he was remorseful, and as such he felt the need to forget all their issues and get closer to him.

He also spoke at length about how Funny Face has treated her through their relationship because of the love he supposedly has for her and how she has come to understand that there is some great connection between them because of their three kids.