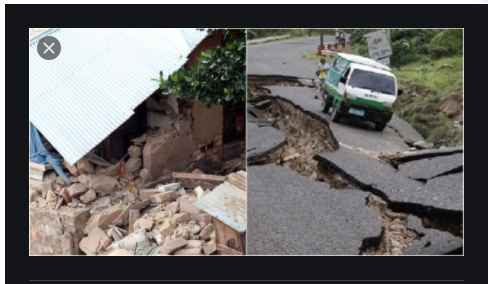 Ghana must position itself through enforcement of its own codes and standards to deal with any destructive earthquake strike in the future in order not to be taken by surprise.

Accra, the nation’s capital lies on a fault-line and there is regular seismic activity in the country. The combined effect of rapid development, industrialization, the building of houses and roads, vehicular movement and even fufu pounding amongst others is leading to the grounds beneath us moving very rapidly.

This has the potential of triggering massive earthquakes which can be devastating if the quality of our buildings are not checked to make them earthquake resilient.

Dr Sylvanus Tetteh Ahulu, an Associate of MaxConsolidated Lawyers and Architects and also former Head of Seismology & Earthquake Engineering Division at the Ghana Geological Survey Authority, said earthquakes by themselves don’t kill but weak structural elements which cannot withstand the strength of the vigorous shaking can lead to death. This is especially so when they disintegrate and fall on people during the cause of a tremor or heavy shaking.

Parts of Accra and its environs were struck by earth tremors in April 2020 and there are expectations that there could be devastating ones in the future.

“There is still an alarming expectation of another destructive earthquake following this one in the very foreseeable future. This brings to bear the need for the country to position itself in addressing such an eventuality. It is not worthwhile for anybody to be taken by surprise.”

A report, after the 1939 destructive earthquake in Ghana, stated that buildings in Accra, in particular, should not go up vertically beyond two storeys because of the inconsistent geology of Accra and the fact that Accra’s soil profile cannot withstand earthquakes with a high rise building regime.

However, with rapid urbanization, engineering solutions and population growth, buildings more than two storeys are springing up within the city.

“It is really worrying that these structures are right in the Centre of a well-known seismic zone. This, therefore, makes those buildings vulnerable to the disastrous seismic effect.”

Besides, most of the buildings in Accra, including some heritage-listed sites, are well over 50 years which is deemed to be the full life span of a building and therefore seismically vulnerable to attacks and failures and maybe a major threat to both life and property when an earthquake strikes.

“Such buildings and many others all need to be subjected to the current code and standards of buildings as enshrined in the Ghana Building Code which was recently launched by the Ghana Standards Authority. This is in line with its current building code and standards and adherence to its recommendations will protect lives and keep Ghanaians safe.

Dr Ahulu called on, concerned built professionals to, as a matter of urgency, conduct threat, vulnerability, and risk assessment to determine the need for upgrading selected buildings for the protection of occupants and other services concerns.

This must be followed by a mandatory requirement for a certified earthquake/seismic assessment as part of every single building permit that will henceforth be processed at Metropolitan Municipal and District Assemblies (MMDAs).

Ghana needs to take lessons from European countries like Italy and start testing the existing structures of all buildings in Accra and beyond for seismic vulnerability.

Recent seismic activities reveal to specialists in the built environment that there is the need for retrofitting of these buildings in terms of earthquake resistance and other risk assessment detailing either to keep them safe or advice on the exact measures to take on each building.

The chief consultant of Max Consolidated Architects and Lawyers, Maxwell Mensah-Clottey when interviewed stated that existing buildings may often require retrofitting for explosive threats based on changes in occupancy or remodelling for different uses apart from the original use.

This, Mr Mensah-Clottey indicates, will identify the maximum credible threats and the associated hazards based on the site conditions, building layout, access control, structural framing, and facade components. “An upgrade is important and effectively affects the structural elements and details of a building including aesthetics and functional impacts that may generally be for the good”.

For example, historic preservation requirements may limit secure design alternatives that would otherwise be considered appropriate. The cost of protective design and the impact of this protection on the property may be minimized by using advanced analytical methods.

These methods may include but are not limited to, structural integrity tests and numerical simulations for the design team to decide on portions of the structural elements which are most likely to be affected and or sustained in any impending damage.

Protective measures that may benefit most from these methods involve the design of protective facade systems, the hardening of structures to resist the effects of progressive collapse, and the retrofit of existing structures. ‘’ this is the way forward for the safety and security of buildings in Ghana’’ he reiterated.