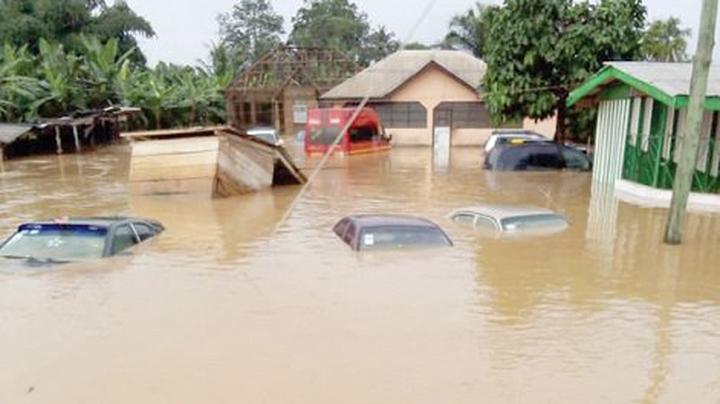 The heavy downfall which occurred last Wednesday and lasted for hours made the Birim River overflow its banks, causing flooding in the area.

Apart from the flooding of many homes, the overflow from the river also caused the blockages of roads.

Many vehicles which were on the roads plunged into the flood.

Structures such as containers, kiosks and buildings also dipped into the flood, forcing occupants to vacate and stay with friends and relatives.

This is the first time in over 50 years that Kyebi has witnessed flooding of this magnitude.

The cause of this disaster has been attributed to the impact of illegal mining in the Akyem Abuakwa area.

An eyewitness said that areas seriously affected by the rains were the Kyebi Court, Kyebi Presbyterian College of Education and the Abuakwa State.

No casualty was recorded, but according to the eyewitness, many animals such as goats, sheep and fowls were drowned.

He indicated that those affected were living in fear of the rains recurring, therefore, have appealed to the National Disaster Management Organisation (NADMO) for assistance.

The eyewitness said the Abuakwa South Municipal NADMO Coordinator, Police Commander and Fire Service Commander were all at the scene to assess the situation.