Hot Video: “Mahama Is A Dead Goat, Allow Me To Insult Him”- Female NPP Communicator 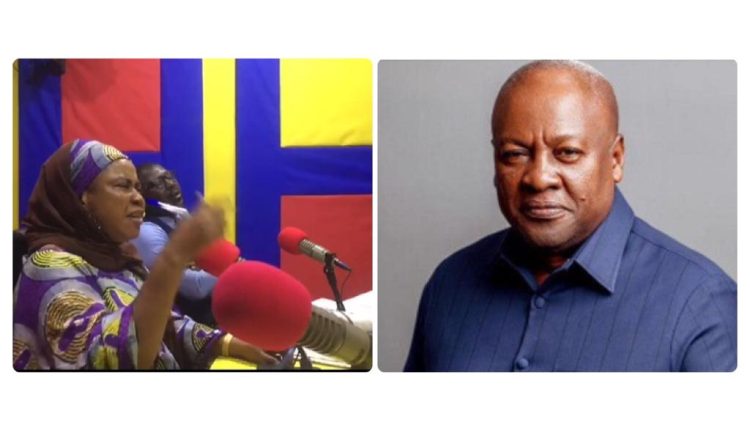 November 29,2022 happens to be the 64th birthday of former President of Ghana, John Dramani Mahama.

Marking his birthday, the former President Mahama on Tuesday was showered with praise and well wishes from his beloved wife, Lordina Mahama, members of the National Democratic Congress, friends, and family from across the country.

While the former President was receiving all the praise and well wishes, Hotfmghana.com  also sighted a video where an ardent member of the communication Team of the ruling New Patriotic Party(NPP)  Hajia Salamatu Temma is describing him as a dead goat .

The outspoken female communicator who was making a contribution on Hot 93. 9FM’s Dwene Ho biom political talk show hosted by Agya Wusu  borrowed the 2015 controversial statement where the former President declared to have a dead goat syndrome for the increasing demonstration and strikes under his administration.

When Hajia Salamatu was asked by the host and Haruna Amaliba to retract her statement since Mahama is a man and in our custom women are not obliged to insult a man like that the outspoken female NPP communicator remained adamant.

She argued that her political opponent , Haruna Amaliba from the Opposition National Democratic Congress(NDC) with whom she was on the show has a penchant for hurling insults at President Nana Addo hence she would also insult the former President Mahama.

She added that ,” Don’t tell me I am a woman and Mahama is a man so I can’t insult him…I am here to defend my party so allow me to do so”.