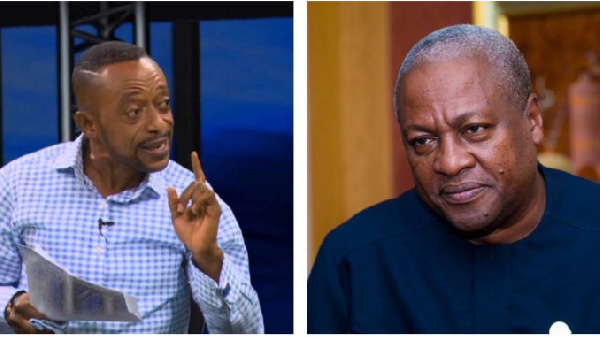 Apostle Isaac Owusu Bempah, founder and head pastor of Glorious Word Power Ministries, has explained his latest vision in which the former President and flagbearer of the opposition NDC, John Dramani Mahama, was carrying four coffins.

In a video on his official Facebook page, the man of God explained that the four coffins being carried by the opposition flagbearer and coming out of a pit had the inscription North, East, South and West and it was positioned accordingly.

He said that a large crowd then approached the former President from the directions that the coffins were positioned.

“He opened the coffin and there was a nice parcel wrapped in it. He then gave each person one of these beautiful well-packaged parcels to the people who have surrounded him, when they opened it was filled with human excreta,” Owusu Bempah said. “In fact, I was sad when I saw that. With this prophecy, if I am lying God should kill me right away.”

The man of God indicated all those who received the parcel from John Dramani Mahama became very sad and they left him behind.

Apostle Owusu Bempah stated that if it were not for this vision, he never knew that wells could be carried.

“And he also placed them at North, East, South and West. And I saw a crowd mobbing him. When he opened, I saw a rainbow, it looked like honey mixed with water. I saw Nana Addo fetching it for them and everyone was happy and jubilating.”

Apostle Owusu Bempah, who is a known NPP sympathizer, explained that his latest revelation signifies that President Nana Addo Dankwa Akufo-Addo is not done with his term.

He noted that the 2020 election is a one-time victory for the NPP and the president.

“You can challenge it but it is what God has told me. It is a one-touch victory in this election,” Owusu Bempah stressed.

HOT VIDEO: NDC Is Winning The Elections In The Spiritual Realm – Prophet