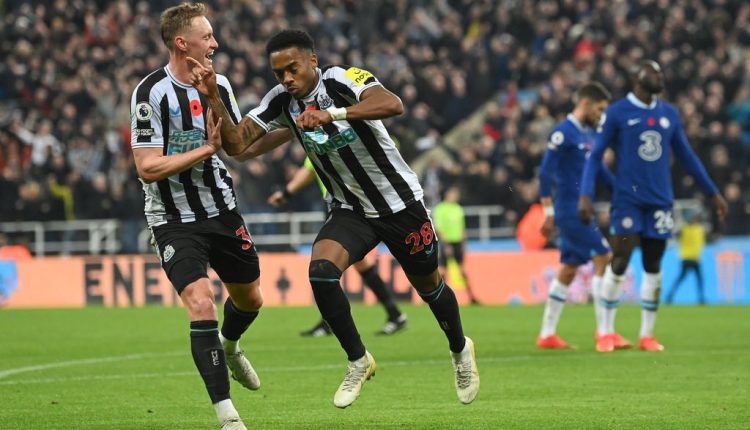 Joe Willock scored his second goal of the season for Newcastle.

Newcastle boosted their European ambitions with a statement win over Chelsea thanks to Joe Willock’s delightful goal.

Having slipped to fourth in the table following Tottenham’s win over Leeds earlier in the day, Eddie Howe’s rejuvenated side regained the third spot before the World Cup break and will be in a Champions League place at Christmas for the first time since 2001.

A fifth successive Premier League win, against an admittedly out-of-form Chelsea, was achieved with England striker Callum Wilson starting on the bench, plus a solidity and fluency that their opponents could not match.

Having worked Graham Potter’s side hard in the first half, and after Sean Longstaff wasted two great chances shortly after the break, Willock finally found a breakthrough when he curled in from 18 yards following a surging run by Miguel Almiron.

A youthful Chelsea, without Pierre Emerick Aubameyang and Raheem Sterling, improved in the second half after the introducing Christian Pulisic.

A Pulisic run led to a Conor Gallagher shot, which was well saved by Nick Pope, but they could not break down a well-drilled Newcastle.

After Liverpool’s win over Southampton, Chelsea’s third consecutive Premier League defeat means they have slipped to eighth in the table, eight points behind fourth-placed Tottenham.

This was a match that once again underlined the rapid progress made by Howe’s side in the 13 months since the club’s takeover, and the team celebrated with their fans at the final whistle following a robust end to the game, when some steaming challenges were exchanged.

Those confrontations continued after full-time, with bickering between Dan Burn and Kai Havertz, and angry Chelsea players maintained their arguments as they departed the field.

But after a lap of the pitch, the Newcastle players headed down the tunnel with huge smiles on their faces after a win that could make their fans dream of a European campaign next season, perhaps even in the Champions League.

For long periods, they showed greater fluency than their opponents, perhaps in keeping with a more consistent team selection than Chelsea, and the result of having Bruno Guimaraes in the fulcrum of their midfield.

But with Chris Wood preferred to the rested Wilson up front, Newcastle failed to truly test Chelsea before the break, with top scorer Almiron flashing a volley over and Gallagher blocking a Dan Burn shot. They also had a penalty appeal waved away by referee Robert Jones after the ball struck Trevoh Chalobah.

The hosts should have taken the lead shortly after half-time when Almiron’s cross was nodded back by Joelinton, with Longstaff having his effort saved by Mendy and then firing over.

But another surging run from Paraguayan Almiron, who has scored seven goals in seven games, helped set up Willock’s curling strike to send St James’ Park into raptures.

For two teams that have recently gone through takeovers, perhaps it is no surprise that Newcastle seems more advanced than Chelsea given they are six months further into their new-found status.

The new owners have preached that their evolution will take time, but the result, performance and feeling around the ground on Saturday felt like Howe’s side is already built to challenge the Premier League hierarchy.

While Newcastle fans basked in the glory of a 10-game unbeaten run as they headed home, Chelsea supporters will wonder what is becoming of their side.

There was plenty of effort from the visitors, but once again an unpredictable Potter team selection looked disjointed, with their situation summed up by three players performing at right wing-back at different points during the game.

There was little they could do about Ruben Loftus-Cheek’s early injury, but after Cesar Azpilicueta was withdrawn at half-time, Gallagher slotted into the position even if he came closest to scoring for Chelsea.

Potter’s side also included Lewis Hall, making his Premier League debut as a left wing-back, with Almiron for company. But the 18-year-old still had time to surge forward in support of Gallagher, Mason Mount and Armando Broja further forward.

He set up Broja for a shot that failed to test Pope in the Newcastle goal and played a part in another attack, where Sven Botman headed away as Broja almost connected with Mount’s cross.

Chelsea had Thiago Silva to thank for steering them through the first half after the Brazilian replaced Loftus-Cheek early on, but Newcastle’s second-half pressure finally told.

Pulisic was one of the few bright sparks and his running helped the visitors pin back Newcastle, but their desperation in search of an equalizer led to the unsavory scenes at the end and pointed to an unhappy Chelsea camp with further questions for Potter.

Watch the classic goal in this video:

The constant pressure paid off. What a hit from Joe Willock 😍

Callum Hudson-Odoi Rejects Chance To Play For Ghana At The World Cup.