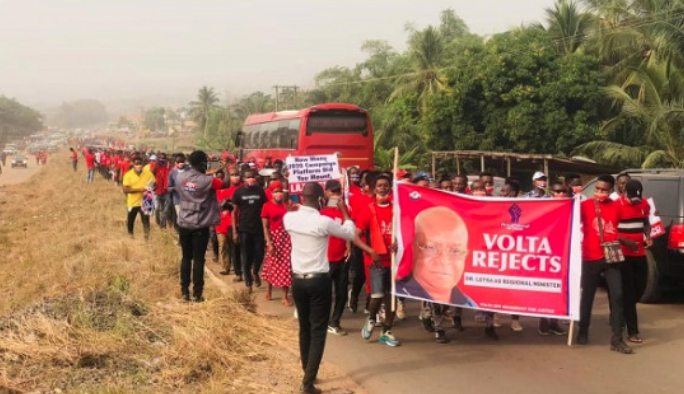 Despite a police statement warning them against any such move, hundreds of supporters of the New Patriotic Party took over various streets in the Ho, the capital of the Volta Region to demonstrate against the re-nomination of Archibald Yao Letsa as Regional Minister.

The supporters had earlier informed the police of their resolve to embark on a protest dubbed “enough is enough” to express their outrage at the President’s decision to keep faith with Yao Letsa as his representative in the region.

The Ho Police Command responded with a notice to the supporters not to embark on any such exercise and that any attempt to pour on the streets will be considered an act of illegality.

But the supporters who are residents in the region defied the order and marched through various streets in Ho to press home their demand for the withdrawal of Yao Letsa as the Regional Minister nominee for the Volta Region.

Placards with inscriptions “Volta rejects Letsa”, “How many campaign platforms did you amount”, among others were displayed by the supporters who were draped in a red and black outfit.

Among the allegations being levelled against Yao Letsa is the apparent lack of support from him to the party’s grassroots.

They claim that in his initial four years as Regional Minister, he offered no significant help to the party in the region.