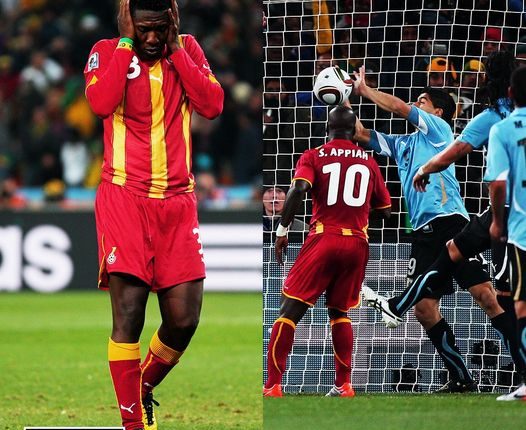 Former Black Stars striker, Asamoah Gyan rates the 2022 World Cup group stage clash against Uruguay as the most important for his country, considering their history.

Ghana was on the verge of history in 2010 – becoming the first African team to reach the semi-final of a senior World Cup before Luis Suarez struck.

A header from a free kick in the stoppage time, headed for the back of the net was deliberately handled on the goal line by Suarez, and although he got sent off

However, Gyan, who is the country’s all-time leading goal scorer with 51 goals failed to convert the resulting spot-kick before Uruguay triumphed on penalties.

“Everyone in Ghana is waiting for the game against Uruguay because of what happened in 2010,” Gyan said as a co-anchor on a SuperSport World Cup show.

“We feel like it is our opportunity to get revenge,” he added.

Ghana will meet Uruguay in their last Group H game on December 2. The Black Stars will open their campaign against Portugal before taking on South Korea.