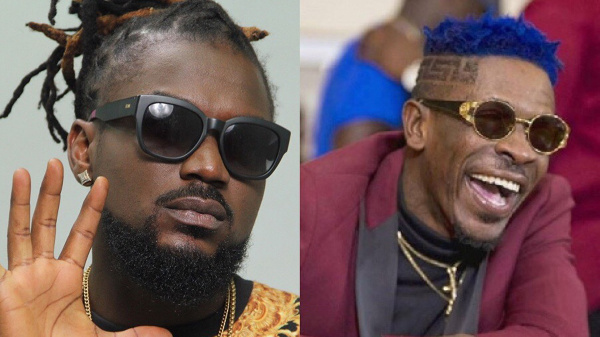 Dancehall music stars Samini and Shatta Wale have dropped a song each for their rekindled ‘beef’.

The uproar between the two celebrated musicians started recently after Shatta Wale dropped a single titled 1DON which was later reported to have inspired Stonebwoy his single titled 1GAD.

The two songs cost a stir in the music industry as Stonebwoy was rumored to have imitated Shatta Wale’s number 1 trend.

However, amidst the debate, Samini also joined the heat dropping a single titled 1KING. In the song, the High-Grade boss threw shots at his opponents proclaiming himself to be the real King of African Dancehall.

After calm settled, Samini took the war to another level as he chastised Shatta Wale for relying on NAM1 to reignite his dead career in a tweet.

The SM boss did not take the tweet lightly and in return fired shots at Samini mocking him for using proceeds from his endorsement deal with MTN to buy credit.

Shatta late dared his old time rival to enter the studio so they rekindle their fight immediately but Samini gave an excuse that he was out of town for some time but will sacrifice some sleep to record a diss song Shatta by Friday.

However, it appears Friday is too long a day to wait for as both musicians have dropped the 1st round of songs for their beef.

Samini who was the first to drop ‘Shot Pointed’ bragged about his dominance in the Dancehall fraternity cautioning his predators to be careful of him because he is capable of firing them without a gun.

Shatta Wale as expected also dropped his titled ‘Kill Fi Fun’ later yesterday asking Samini if he has ever been to war or seen death before.

According to the SM boss, Samini has not been able to collaborate for a major feature after so many years in the industry.The war between the two sworn rivals is expected to wear on as the days go by