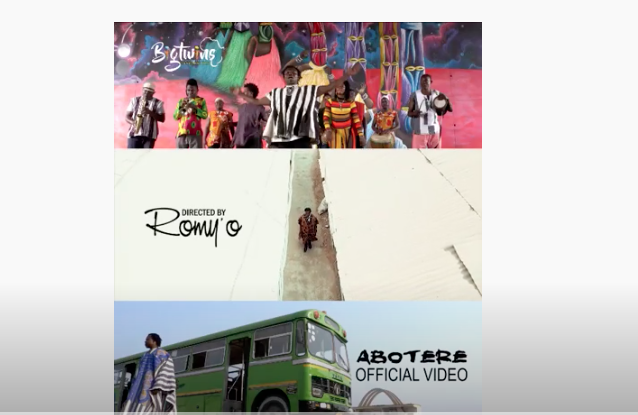 Sensational Traditional artiste, Big Twins is set to release the most expensive music video ever to be produced in the history of the Ghanaian music industry by a traditional artiste with his newest track titled ‘Abotere’

The masterpiece which was engineered live by Big Brian talks about the essence of being patient in life. The video which was shot in various parts of Ghana was directed by internationally acclaimed music video director Romy’o.

Romy’o’s background in illustration and visual effects means his videos are full of incredibly subtle tricks and motifs, forcing your eyes into every inch of the screen just to make sure you’ve taken it all in. While this alone is enough to make a strong impression, when combined with such compelling visual concepts as he is known for, the results are nothing short of mesmerizing.

Confirming the release date to www.hotfmghana.com, Big Twins who is well noted with the hit song ‘Mama Why, cogitated that , “the audio together with the video will be released simultaneously on January 10, 2021”.

According to the ‘Mama Why’ crooner, per the location, costume, Concept, Choreography and the director, “I spent nothing less than Ghc 150, 000.00 … It’s actually the most expensive music video ever to be produced by a traditional artiste”.

Big Twins urged his fans to expect a well-directed ‘Abotere’ music video that would win laurels for Ghana.

Well, kindly watch the teaser below

2020 In Review: Internet Sensations Of The Year