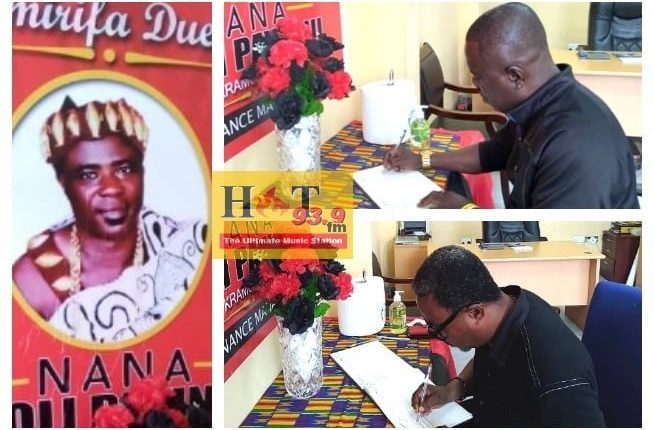 0
Share
Management of Accra-based radio station, Hot 93.9 FM has opened a book of condolence for their deceased finance manager Nana Ndoli Panyin lll today, October 14, 2020.
On October 2, 2020 the Hot 93.9 FM’s financial manager, Nana Ndoli Panyin III was found murdered at Bobson Hotel in Kaneshie. According to the report from the Kaneshie police, Daniel Bobson, assistant manager of the aforementioned hotel reported the incidence at 7:05 pm. Nana Ndoli Panyin III who was reported to have been missing on Thursday , October 1 was discovered by the assistant hotel manager, lying lifeless in a gruesome, gory scene in one of the rooms. He informed that the deceased who had checked in the previous day, Thursday at 8 pm was found murdered at about 6pm on Friday.
The police report indicated that his head was almost separated from his body, and the cutlass with which he was murdered was hidden under the mattress on which his body laid. Also hidden under the mattress were an ignition key and two traditional bracelets. Shoe prints were also discovered at the scene. His car, Toyota Rav 4 with registration number GE 1730-09 was retrieved at the Takoradi station in Kaneshie and taken to the Kaneshie Police Station.
The police informed that the body has been deposited at the Police Hospital Mortuary for preservation, autopsy and identification, and the crime scene has been preserved for further investigations by crime experts from the Criminal Investigations Department (CID) headquarters, Accra. Investigations are still underway, and so far, two suspects–his spiritual father and one other associate–have been been indicted and remanded.
Well wishers, friends and sympathisers are welcome to pass by the Hot 93.9 FM premises at Accra Central, near the central post office.
0
Share

VIDEO: Henry Asante Is Sleeping On The Job- Bigality Rants

How Can EC Qualify Akua Donkor,When She Cannot Read And Write? – Gyataba Asks