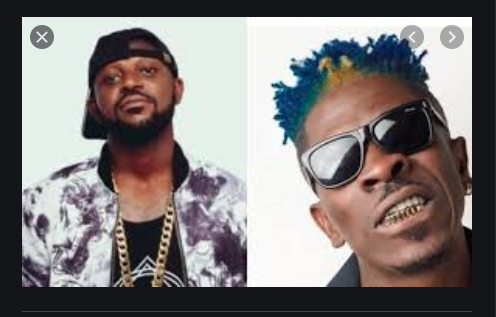 It appears Ghanaians might be experiencing a round two of the ‘Gbe Naabu’ and ‘Say fi’ war between Yaa Pono and Shatta Wale as these two are gradually resurrecting an old beef.

Waking up a ‘sleeping dog’, Yaa Pono took to Twitter on February 18, 2021, to request a ‘beef’ from the dancehall artiste who is one of his greatest rivals in the industry.

In the said tweet, he suggested to Shatta that the showbiz industry is quite slow thus he would love to engage in a lyrical beef with him just for the fun of it.

“Shatta Wale the system make quiet, make I shake you small?” he wrote

For reasons best known to himself, Shatta deleted the tweet shortly after posting it.

Yaa Pono after observing Shatta’s timeline and noticing that his tweet no longer existed attacked the dancehall artiste and labeled him a coward.

Also, to tackle Shatta’s claim that he (Yaa Pono) is an underground artiste, he ridiculed the dancehall artist saying that before his fame, he remained underground for 19 years.

“Tweet am again. Double jon. Wat I tweet wasn’t insult. 4ple jon,, u have the longest underground roll in Ghana history 19 years minus my 6 years go fit born tutulapato.. #gbee,, me di agro wo be gyimi,” he wrote

Meanwhile, some social media users are of the view that the ‘Amen’ hitmaker is seeking attention to resurrecting his ‘limping career’ by riding on the popularity of Shatta Wale through a staged beef. 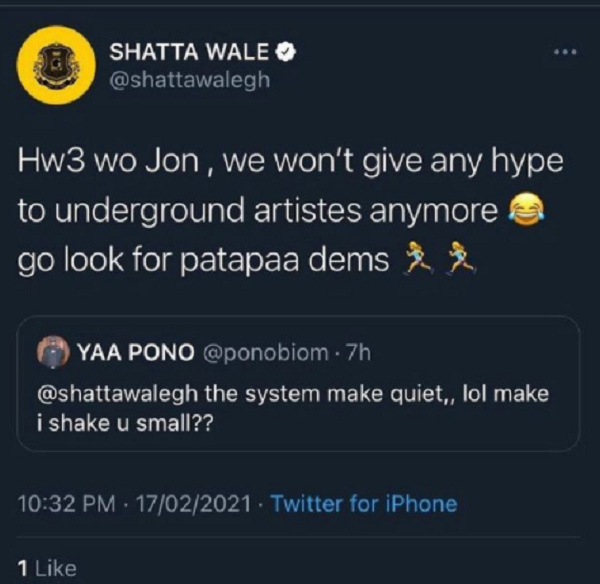 Tweet am again.. Double jon.. Wat i tweet wasn’t insult.. 4ple jon,, u have the longest underground roll in Ghana history 19 yrs minus my 6 yrs go fit born tutulapato.. #gbee,, me di agro wo be gyimi..

These two have not been on good terms since 2017 and at the slightest opportunity, they try to go hard at each other.

It all started when Yaa Pono was reportedly denied an opportunity to perform at a concert headlined by Shatta Wale in Cape Coast in the Central Region.

Yaa Pono was of the view that he was not allowed to perform because his performance would have overshadowed Shatta Wale.
This infuriated Yaa Pono as he took to social media and dared anyone to disrespect him or say “fi”.

A fearless Shata Wale took up the challenge and released a song titled ‘Say Fi’.

Yaa Pono in response unleashed venom on “Gbe Naabu’, a song that made fun of the size of Shatta Wale’s mouth, his works, and his lifestyle.