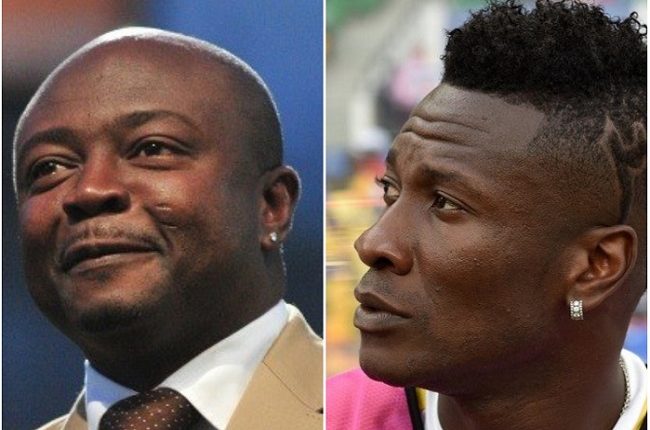 Asamoah Gyan’s manager, Samuel Anim Addo has clashed with the spokesperson of the Ayew Family, FiiFi Tackie over the launch of the former Black Stars captain’s autobiography.

FiiFi Tackie on Tuesday, April 3, released pictures of Abedi Pele’s autobiography to dismiss notions that Asamoah Gyan is the first Ghanaian footballer to issue an autobiography.

The former Olympique Marseille ace and the Champions League winner’s autobiography was written both in English and French long before Gyan planned to ink his into history according to Fiifi.

“The Maestro Abedi Ayew Pele’s Autobiography was written in 1992 in English and French versions. This is a copy of the French version,” FiiFi Tackie tweeted.

However, Anim Addo launched an attack on Fiifi Tackie as he claimed that the latter was trying to take the shine away from Gyan’s successful book launch.

Anim Addo, who is a Ghana Football Association [GFA] Executive Council member in a reply on Twitter indicated that he does not understand why Fiifi Tackie was staging a war for Abedi Pele just because he cannot stand the name Asamoah Gyan.

“And who challenged that, why this particular time? Is it because the BabyJet book was launched successfully or you? Can’t stand the name Asamoah Gyan?? Padi stop this negative vibe wai, it won’t help you. Maestro is relaxing at home enjoying his family, let me be aah.”

Gyan raised over Ghc340k at the event held over the weekend.