The government of Ghana has condemned the repeated attacks by the Iranian-backed terrorist Houthi militia on civilians in the south of the Kingdom and Abu Dhabi.

The Ministry of Foreign Affairs in a statement said the attacks are a violation of international law and threaten efforts at restoring peace and security.

The government of Ghana also commiserated with victims of the attack.

“We express our deepest condolences to the Government and the people of the United Arab Emirates, the Kingdom of Saudi Arabia, and the families of the victims,” the statement said.

This comes following the attack by the Houthi militia which has caused damages to some workshops and civilian vehicles after intercepting a ballistic missile over Dhahran Al-Janoub on Monday, January 24, 2022.

Residents sustained injuries after the Houthis fired a ballistic missile that fell in the industrial area of Ahad Al-Masarihah in Jazan on Sunday, January 23, 2022. 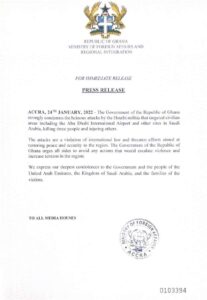