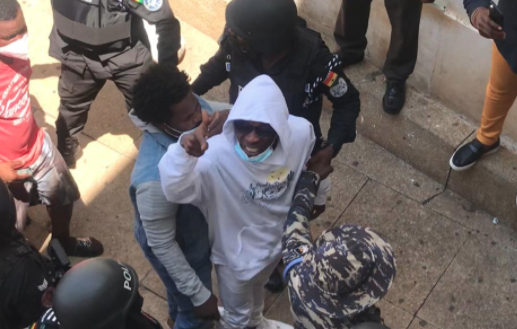 For those who were presuming remanding celebrated dancehall artist, Shatta Wale would let him become remorseful may have been dreaming.

The dancehall artiste has not learnt his lessons even after being remanded into Police custody by the Accra Circuit Court for one week on Thursday.

The ‘Wumaame Twe’ hitmaker  pleaded not guilty to the count of; Publication of false news that caused fear and panic in the public domain.

The court presided over by Mr Emmanuel Marvin Essandoh while remanding the accused said the interest of the public is paramount.Immediately the judgement was passed, while being whisked by the Police to commence his sentence with his accomplices,  the celebrated dancehall artist revealed that he is ready to spend the rest of his life in jail.

The fumed dancehall artist who was being cheered by some of his uneducated fans said,” I wanna fucking go to jail for life”.