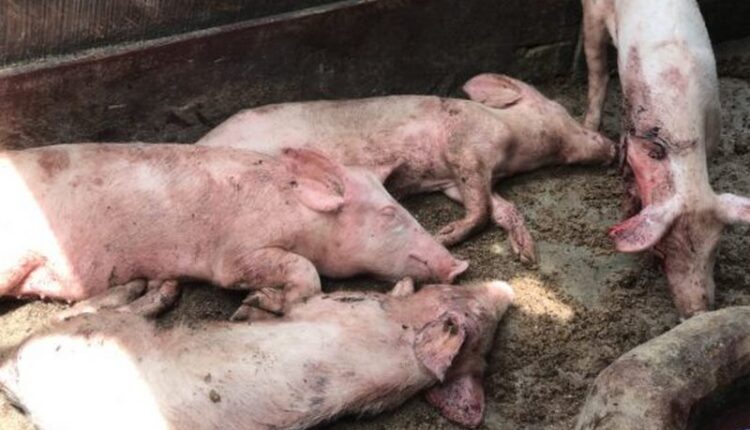 The incident, which occurred within a three-week period, has affected more than 50 farmers in the pig farm cluster in the Ejisu Municipality of the Ashanti Region.

The EJisu pig farm cluster is one of the biggest pig farms in the region where individual farmers come together to farm and support each other.

A month ago, this place had so much life.

Ordinarily, in every pig farm, one is greeted by loud oinks from pigs but the situation is different in the cluster these days.

Seated under this tree are frustrated and confused swine farmers. This has become their routine.

They come here to chat among themselves and deliberate on ways to get back to business.

Three weeks ago, one of them, George Agyei, noticed changes in his pigs to a strange disease which will later be identified as the African Swine Fever.

For seven years, this is the first time he is experiencing this.

“Everyday as we go round our farms, we often touch the pigs especially when we realised they are not active in the pen. On this day, I realised the temperature of one my pigs were very high – never experienced that before.”

He was not the only one. Other farmers experienced other symptoms – some of the pigs were inactive in the pens, while others had blood oozing from their earlobes and eyes.

They then informed the veterinary officers, according to the farmers, who came to administer some treatment to the pigs.

But that wasn’t enough. After few days, it spread across other pens and pigs started dying.

The Ejisu pig farm cluster also has a makeshift slaughter house. According to the farmers, a colleague farmer from outside the cluster brought in a pig to be slaughtered.

It happens that, the animal had contracted the disease before it came in so those who had contact with it and then with their pigs could have spread the disease to the cluster.

Indirect contact through fomites such as equipment, vehicles or people who work with pigs between pig farms with ineffective biosecurity.

The Pig farmers sell the animals in kilos. A kilo is calculated at 14 Cedis.

Festive seasons and dry season are often the best of market for selling pork. So the farmers were preparing for the Christmas in December until this unfortunate outbreak.

“The older and bigger ones – those weighing above 100 kilos – were dying quicker than the younger ones,” Mr Agyei explained.

Mr Agyei is part of the Ejisu cluster of more than 50 pig farmers who are the worst hit by the disease.

He, for instance, has lost more than 35,000 cedis from the current situation.

“I have 30 pens which contain at most five pigs. We sell by kilos – 14 cedis per kilo is how we calculate for sale. And we sell when the animal is 50 kilos and above.”

The cluster contains close to 3,500 pigs, which means close to 100,000 cedis worth of investment have been lost in this enclave alone. The pens are now empty.

Veterinary officers at the Ejisu Public Health directorate have been assessing the situation.

Chief Technical Officer for Public Health in charge of Disease Control, Hagar Oforiwaa, explained that because the disease is not zoonotic, it cannot be transferred to humans.

“They have a vibrant association so we have educated these farmers and other members on how to contain it. They have been advised not to sell the diseased pigs to anyone,” she said.

To avoid such disease outbreaks in the future, the farmers are advised to observe proper biosecurity practices.

Meanwhile, the farmers have begun putting in measures to get them back to business but are yet to get clearance from the health officials.

One explained that “the best option here is to allow government kill the animals and disinfect this place. However, according to our checks, the authorities say there is no money for such a purpose. So, we’ll have to find other means to do it ourselves.

“Now we prohibit the slaughtering of animals from outsiders. We would also avoid random visits to the farm,” another said.

Leadership of the farmers have asked that they contribute some amount of money to be used for disinfection but that has not been forthcoming.

Madam Oforiwaa says it will take close to six months for them to start working in this space again.

So now, the farmers are waiting for the rest of the pigs to die of the disease, then they bury them.