Referee Shows Dog Red Card During Football Match After It….. 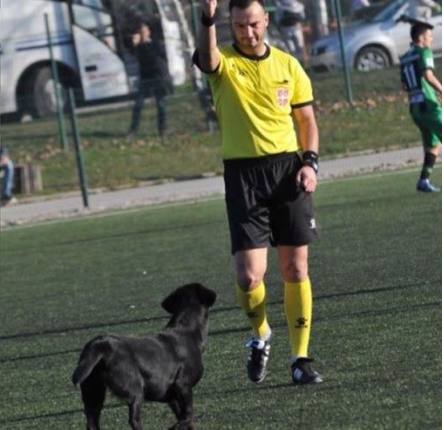 A referee in Serbia was so upset about a dog’s constant interruption of a match he was officiating that he issued the hound with a red card.

That didn’t deter the dog, however, as it kept disrupting the match, forcing it to eventually be abandoned.

The friendly match between Serbia’s second-tier teams Radnicki 1923 Kragujevac and Kolubara Lazarevac, was expected to go off without a hitch.

The pooch was, however, having none of it.

The referee, finally frustrated by the dog’s antics, brandished a red card at it, to the amusement of some of the players.

Undeterred, it remained on the pitch, forcing the referee to call off the game and award Kolubara a 3-0 win.

The reactions to the incident on social media have been hilarious.

It’s not unheard of for animals to invade sporting venues as matches are going on.

Birds, rodents, cats and dogs have forced matches to be halted as they were ushered off the pitch.

In March last year, a rat was spotted on the pitch of the Accra Sports Stadium during Hearts of Oak’s 4-0 win over rivals Great Olympics.

Possibly stirred by the thumping Hearts were handing their city rivals, a rat poked its head out and made its way across the pitch after Afutu, 23, scored his second goal and the club’s third on the night.