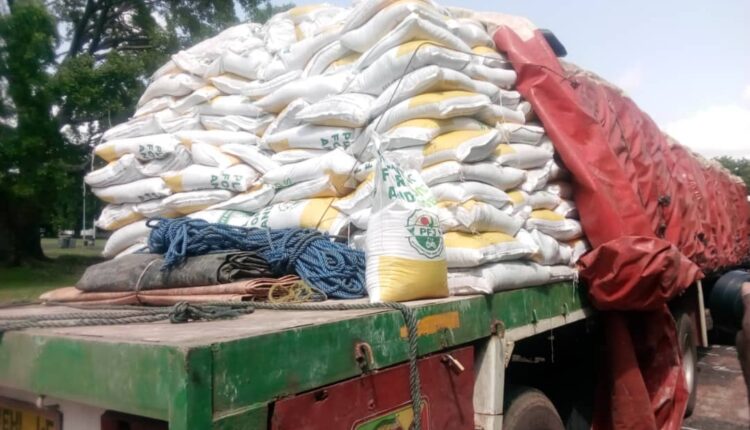 According to the Chairman of the Council, Dr Hafiz Bin Salih, the smuggling of fertiliser to Burkina Faso on June 8, 2021, valued at ¢1,620,000, was unfortunate.

One major challenge faced by the Planting for Food and Jobs Programme introduced by the government in 2017 was the smuggling of farm inputs by accredited input dealers into neighbouring countries, especially Burkina Faso.

The Upper West Region made the headlines for the wrong reasons for the sea of subsidised fertiliser smuggled into Burkina Faso by some accredited government input dealers.

The region at the time was described as the fertiliser smuggling headquarters of the country, prompting a visit by the Minister of Food and Agriculture to the Region, Dr Owusu Afriyie Akoto, to put a lid on it.

Three years after the visit, it appeared some of the accredited input dealers have not turned over a new leaf.

“We got intelligence that smuggling of fertiliser was taking place in Sisaala West. We, however, got alarmed when we got the information that on June 8, this year, about 45 Rhino trucks carted fertiliser, each carrying about 300 bags of government subsidised fertiliser, and this is worrying,” Dr Bin Salih revealed.

Dr Bin Salih, addressing input dealers and major stakeholders in the agriculture sector at Tumu, announced measures taken by the Upper West Regional Security Council to curb the smuggling of the fertiliser.

“All farming inputs coming into the Region, first of all, must report to my office [Upper West Regional Coordinating Council] for us to know the vehicle coming, the quantity of fertiliser carrying and the destination…once they get into Sissala East or West, we expect the consignment to be offloaded into a warehouse. We will not allow any long vehicle to be distributing fertiliser, that will not happen,” he stated.

He also announced timelines to track the movement of vehicles carrying fertiliser.

”The movement of vehicles carrying fertiliser is 6:00am to 6:00pm. Any time after this we will confiscate the fertiliser,” he said.

He urged all accredited input dealers doing genuine business to continue and encouraged them to help fish out the miscreants among them.

He said the Planting for Food and Jobs programme has benefitted the good people of the Sissala West and East and that impacted positively on the economies of these areas.

“Those of you doing genuine business, you have nothing to fear but those of you who engage in nefarious activities, criminal activities, please know that we will come after you,” he warned.

UEW Student Arrested Over Death Of Woman In Hotel Room

Prices Of Fuel To Go Up Again – NPA