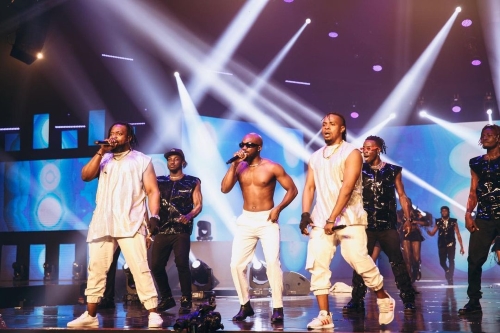 One of the most reanimating performances that characterized the 2022 Vodafone Ghana Music Awards happens to be award-winning artist, dancer and song writer Mr. Drew’s intriguing performance with legendary music duo FBS .

The performance which came as a surprise took most of the audience to the dance floor. The artists took over the event with some dance moves as they performed FBS all-time hit “Oluman Boogie”. Seeing the duo perform again after several years of break in music was an exciting moment for the audience and Ghanaians.

Reacting to their 2022 scintillating performance at the VGMAs on Atinka TV’s ‘JUKEBOX’ hosted by Nana adwoa Annan, Abass Najo and Dee Najo of the veteran Ghanaian music group(FBS) said the organisers of the most prestigious award scheme never knew they were going to perform on the night.

Explaining how they got in touched with Mr Drew , FBS revealed that they called him to help him work on his stage performance before admitting to perform with them on that night

“When we called him, he was surprised that that was when he told us that he would want to perform with us on the night(VGMA) .We secretly rehearsed our dance moves, and with a live band .The organisers didn’t even know we were performing…We covered our faces with a mask backstage so people wouldn’t notice us …when we jumped on the stage it was massive”. FBS told Nana Adwoa Annan

FBS spoke highly of Mr Drew for making the right choice to perform with them.They urged local artists to promote their craft in order to end the woes militating against the current Ghanaian music industry.