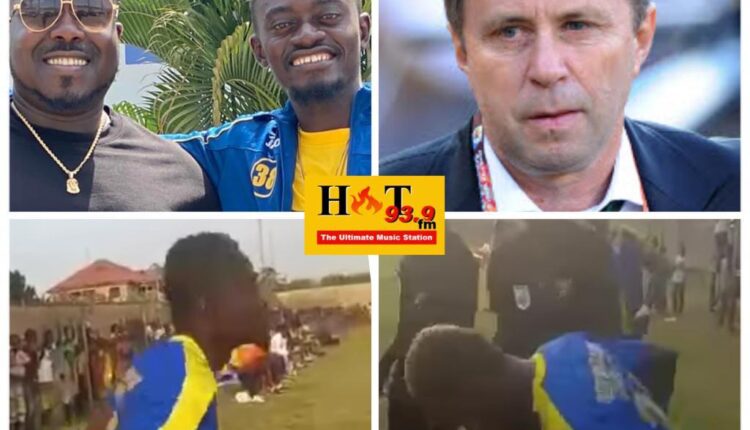 Manager of multifaceted Ghanaian celebrity, Kwadwo Nkansah popularly known as LilWin; Richmond Amankwah better known as Ray Moni has stated that the Coach of the Black Stars Milovan Rajevac must invite the former into the Black Stars’ squad for the 2021/22 Africa Cup of Nations.

The 2021 Africa Cup of Nations will take place in Cameroon from 9th January 2022 to 6th February 2022. Ghana who has been paired alongside Morocco,Comoros and Gabon in Group C will be aiming to end the 39 years trophy drought .

However, Lil Win who now plays for New Edusiase FC after signing a two-year contract with the Bekwai team made his debut appearance  on Tuesday, December 14,2021 as they hosted Unistar Academy in the National Division One League at the Bekwai Gyamfi park.

Lilwin who is an actor, musician and now a footballer came in for Richmond Acheampong deep into stoppage time. The match day five encounter ended 2:0 in favour of the home team. Though he didn’t score, Spectators who thronged the Bekwai Gyamfi Park were sent into a state of hysteria as they witnessed the multifaceted celebrity  exhibit startling skills.

For New Edubiase to emerge winners of the zone, they have to battle it out with opponents such as Skyy FC, Samartex, Mysterious Ebusua Dwarfs and Hasaacas .Lil Win  has vowed to help New Edubiase qualify for next season’s Ghana Premier League.
Reacting to Lil Win’s performance in a facebook post sighted by Hotfmghana.com, his manager, Ray Moni stated that the coach of the Black Stars Milovan Rajevac must invite him into the Black Stars’ squad for next year’s AFCON.
According to Ray Moni, the performance of the 34-year-old  produced signifies that he is overly prepared to help the Black Stars win the  AFCON .
“It’s time for the Black Stars coach to invite Lilwin into the Black Stars squad. He made his debut today and he proved beyond doubt that he can overly help the Black Stars Win the 2022 AFCON.” Ray Moni said.
Check Ray Moni’s post  and how Lil Win made his debut in the video below 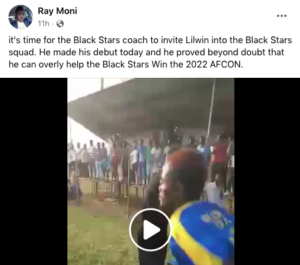