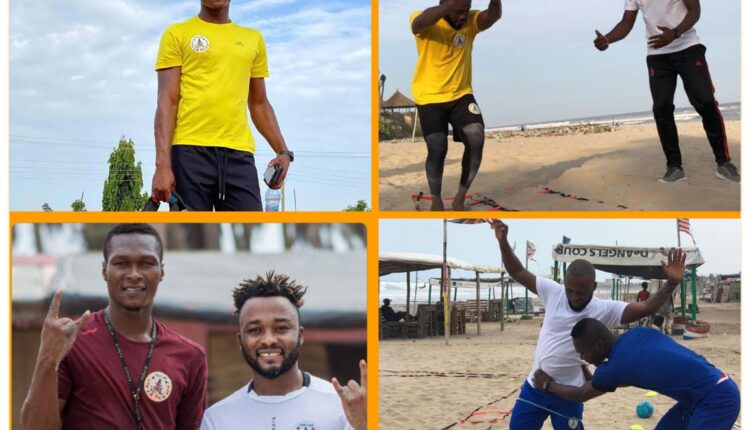 Newly signed Accra Hearts of Oak’s sensational Midfielder, Gladson Awako has confirmed that 26-Year-Old Ghanaian physical trainer, Francis Totti Laryea better known as Totti Laryea is the one who helped him to regain his fitness before the start of the 2020/21 Ghana Premier League.

Gladson Awako who was then the Captain of his former club Accra Great Olympics  took the 2020/21 Ghana Premier League by storm with a world-Class performance.

The 2009 FIFA U-20 World Cup winner recently signed a new contract with the winners of the league , Accra Hearts of Oak after being hailed as one of the outstanding home-based players in the 2020/21 league .

As a means of strengthening their squad for the CAF Champions league, Hearts of Oak signed Awako on a deal the former Olympics’ captain will reportedly earn about $2,500 a month.

It would be recalled that, Totti Laryea who was reacting to Awako’s move to Hearts of Oak in an interview on Hot 93.9FM, revealed how he helped the former to regain his fitness ahead of the 2020/21 premier league:

“Oh, I am very happy for Awako…Stonchist, do you know that I am the one who helped Awako to regain his fitness?Yes ,I am the one”. Totti said

Speaking to Hotfmghana.com, Gladson Awako confirmed that,” Yes, it’s true Totti Laryea helped me to regain my fitness when I came from the USA and before the start of the 2020/21 league”.

Video:Gemann Intentionally Locked Me In His House A Day Before He Killed The Taxi Driver-Jagger Pee

Driver’s Intestines Gush Out After Being Stabbed During Fight