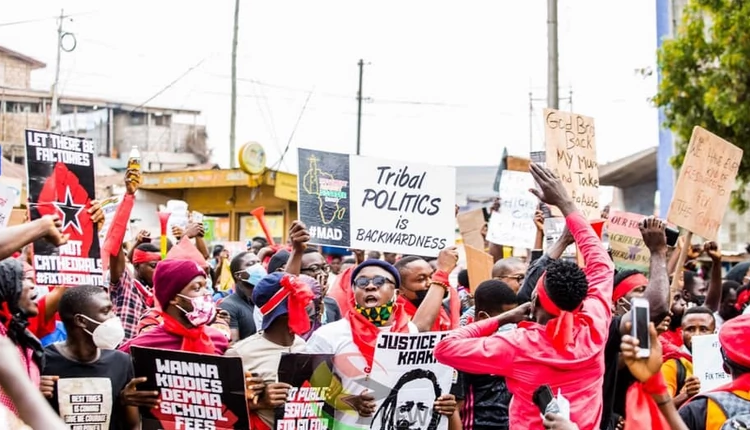 The Unemployed Graduates Network stormed Parliament today to protest against the 2022 budget by government.

According to the Network, the budget will increase the current hardship in the country.

Clad in red attires and bandanas, the graduates chanted for the abolishment of the controversial e-levy.

The demonstration ties in with that of the #FixTheCountry conveners who are also protesting against the budget.

The protestors said the 2022 budget and economic policy does not address the core issues of the structure of the economy.

“Having analysed the 2022 budget, we have come to the conclusion that the budget presents no hope for the people; rather, its proposed policies and measures will exacerbate the plights of the people and increase the hardship on us” the demonstrators said.

The Unemployed Graduates Networks was formed to amplify the plights of graduates.

The network is to bring to light the plight of graduates from the various tertiary institutions in the country.

The announcement of the formation of the network was made in a statement dated November 3, 2021 and signed by its President, Selorm Kwame Dzramado in Accra.

The announcement of the formation of the network was made in a statement dated November 3, 2021 and signed by its President, Selorm Kwame Dzramado in Accra.