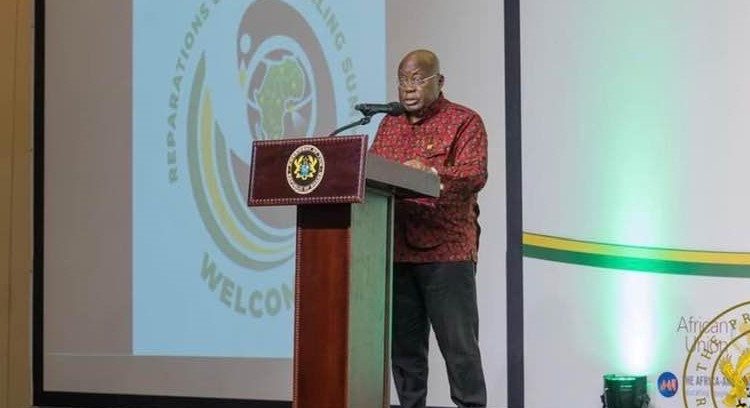 President Nana Addo Dankwa Akufo-Addo has stated that reparations for Africa and the African Diaspora are long overdue.

He has, therefore, called for more dialogue on the issue.

The President, however, said such a discourse would not be successful without discussions on racial healing.

The summit is being co-hosted by the AU Commission, the Africa Transitional Justice Legacy Fund (ATJLF), the Africa-American Institute (AAI) and Global Black, with funding from the John D. and Catherine T. MacArthur Foundation.

It is part of a time-bound multi-year programme that will support the development of a unified and comprehensive strategy and advocacy agenda on reparatory justice and also present an opportunity to holistically discuss and reflect on strategies for reparations and racial healing as a result of the trans-Atlantic slave trade, slavery and colonialism.

According to him, the entire continent of Africa deserved a formal apology from the European nations involved in the slave trade for the crimes and damage the trade had done to the population, psyche, image and character of the African the world over.

He further said no amount of money could restore the damage done by the trans-Atlantic slave trade and its consequences which spanned many centuries, adding: “We need to heal from the wrongs of the past in order to capitalise on the opportunities that await us in the future.”

President Akufo-Addo said the Caribbean community had taken the lead in the reparations debate and, therefore, urged the AU to engage with “our kith and kin from the Diaspora and form a united front to advance the cause for reparations”.

Those Applying For Ghana Cards Can’t Get Them By Sept. 30 – NIA Boss