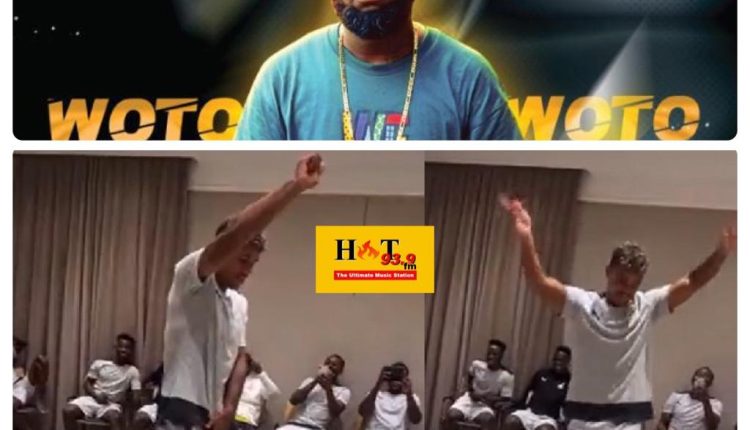 The Black Stars were painfully defeated by three goals to two by soccer powerhouse Portugal. The loss has put the Black Stars’ players and the nation as a whole into a state of desolation  and despondency.
But finally UK-based sensational dancehall artiste Akata Stone has dropped a song that seems to revitalise the mood of the players ahead of their next clash against South Korea on Monday, November 28 after listening to it.
The song titled ‘Woto Woto’ is a remixed version of Nigerian singer Fizzy Mayur’s ‘Woto Woto’ hit song. Even though the song is not a motivational song but a love song, per the way it was produced ,Hotfmghana.com can state confidently that it would send the players into a state of laughter that would really help them go into the game against South Korea in a licit frame of mind.
Akata Stone whose real name is Lloyd Twum-Ampofo apart from the just released ‘Woto Woto ‘ song, has a month ago also dropped another smash hit song dubbed ‘We Go Party’ ‘We Go Party Hard’ was engineered by Vicky Beats while the video was directed by King Ed studios in London.
Just like his previous music videos, Akata Stone did not fail to impress with the aesthetic artwork, scenery, and choreography. Both songs are currently on all streaming platforms.
Listen to ‘Woto Woto’ remix below
0
Share