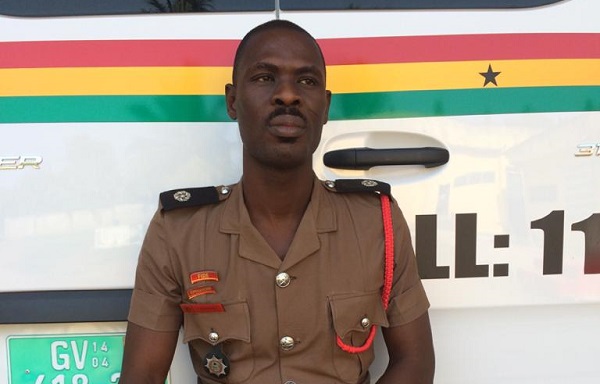 The late Fire Officer, Assistant Station Officer (ASO) Joseph Baidoo who died during a rescue operation at Gomoa Oboasi, has been promoted posthumously to the rank of Assistant Division Officer Grade II.

The Deputy Minister for the Interior, Mrs Naana Eyiah Quansah who announced the decision when she addressed a gathering of family members, well-wishers and sympathisers at the one week observance of the death of the Fire Officer, also announced that the government has decided to fund the education of her two-year-old daughter to the tertiary level.

Scholarship for daughter
Mrs Quansah explained that upon extensive discussions with the GNFS, the government had decided to fund and sponsor the education of the two-year old daughter of the late fire officer up to the tertiary level to become a responsible adult in future.

She said the government would be fully commit to all financial obligations needed to assist the fire officer’s daughter to acquire good and quality education in honour of her late father.

Condolences
The Deputy Minister extended government’s condolences to the wife and family of the late fire officer, saying “government and the GNFS are proud of ADO II Baidoo for his commitment and dedication to duty even at the cost of life. Although some people were trapped in a well at the point of death, he defied all odds to save them but unfortunately lost his life thereafter”.

She encouraged the fire personnel at the Agona West municipal office of the GNFS where ADO II Baidoo was stationed not to be demoralised but should overcome the sad incident and continue to work to uplift the image of the service.

Deputy Chief Fire Officer (DCFO) Mawusi Sarpong, Director of Welfare, GNFS, advised the fire personnel not to be dispirited as a result of the sad incident but should continue to discharge their professional duties to save lives and properties.

Sorrowful ceremony
Sorrow and emotions took the greater part of the dignitaries, friends, sympathisers and colleague fire officers who thronged the Bethesda Methodist Church, near the Swedru School of Business (Swesbus) to join the bereaved family to observe the one week rites of the late fire officer.

The mourners defied an early morning downpour and filled the church auditorium to capacity.

The wife, family members, friends and colleague fire officers could not hold back their tears as they wept uncontrollably.

The final funeral rites of late ADO II Baidoo is scheduled for Friday, November 18 to Sunday, November 20, 2021 at his family residence in Ankaful, Cape Coast.

ASO Joseph Baidoo drowned after rescuing the three persons – the owner of the well who drowned in an attempt to rescue two workers, Nana Kwame and Nana Yaw who were working in the well.

The fire officer after rescuing the three people fell into the well and died as the rope around his waist loosened when he was being pulled out of the pit after his rescue effort.

It took reinforcement from the Winneba office of the GNFS before his lifeless body was retrieved from the well after about two hours.

The late officer who was popularly referred to as ‘Kabila’ is survived by a wife and a two-year-old daughter.