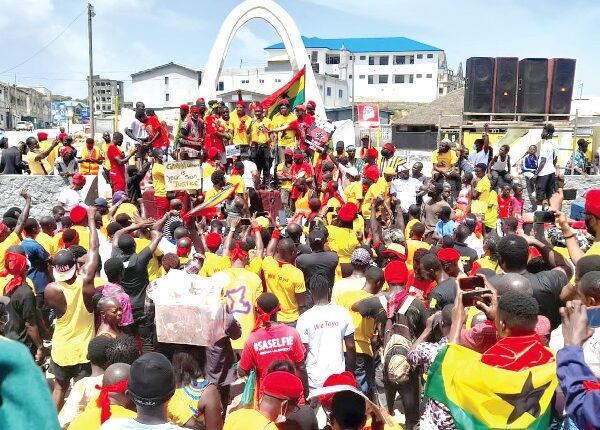 Hundreds of members of the #FixTheCountry movement yesterday staged a demonstration in the twin-city of Sekondi-Takoradi in the Western Region to press home their demand for the government to address prevailing challenges in the country, including ensuring the amendment of portions of the Constitution.

The demonstrators started massing up at the Nkrumah Roundabout, the convergence point, about 5 a.m., with the march eventually taking off about 6 a.m. through the Mankessim White House road to the Takoradi Central Market (Ground Zero).

The protesters, clad in red and black and the national colours, amidst singing, drumming and dancing, proceeded to the Paa Grant Roundabout, the Sekondi-Takoradi highway through Kweikuma, finally converging on the Fish Roundabout (Enamnaase), near the Naval Ratings Mess in Sekondi, where they were addressed by various speakers.

The Convener, Mr Enesto Yeboah, said no government in the country had produced a leader like Osagyefo Dr Kwame Nkrumah in terms of achievements and commitment to the development of the nation.

He urged the youth to emulate the determination and fearless nature of Dr Nkrumah, who said: “The secret of life is to have no fear; the youth of Ghana must have no fear — we have to be fearless.”

According to him, the prevailing social and economic conditions in the country were unacceptable and blamed successive governments for the situation.

Mr Yeboah, however, said the time had come to ensure that the concerns of the people were fixed, adding: “Let no one see us as leaders; we are all leaders and we have to force them to address our development challenges.”

“What Dr Nkrumah said in 1949 that we have a battle and that the battle would be against old ideas is still relevant today,” he added.

A leader of the movement, Lawyer Osagyefo Barkar Vormawor, said part of the reasons people could not get the change they deserved was that there was some deficiency in the Constitution which needed to be amended.

He, therefore, appealed to the people to join the campaign for the change of the Constitution by appending their signatures to a petition that was being circulated.

For his part, another member of the movement, Mr Okatakyie Afrifa Mensah, commended the people of the region for their massive turnout for the demonstration, which he described as successful.