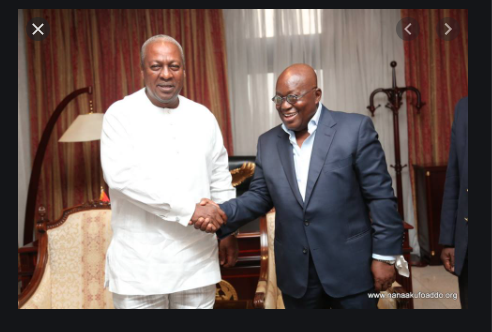 Dr Emmanuel Akwetey, the Executive Director, Institute of Democratic Governance (IDEG), has appealed to the governing New Patriotic Party (NPP) and the opposition National Democratic Congress (NDC) to work together in the best interest of Ghana.

He said the outcome of the December 7 polls, especially the parliamentary election, was an indication that Ghanaians wanted both the NPP and the NDC to work together for the nation’s good.

The Electoral Commission (EC) said the NPP won 137 legislative seats, while the NDC had 136, with one independent and one seat yet to be decided at Sene West Constituency in the Bono East Region.

Dr Akwetey, who made the appeal in an interview with the Ghana News Agency in Accra, said the next Parliament would be “a very tight one” needing cooperation from both sides.

He said the electorate created the situation and that whether they did it consciously or unconsciously that was the result, which reflected the spirit that they were conveying; stating that “you have to govern together and not the “winner takes all” every time.

“So, it’s a different situation we are facing, it is a different scenario. It’s not unusual; I mean such situations occur in democracies especially those with parliamentary systems.

“And therefore, when it occurs in parliamentary systems, what they do is, there is something they call the will of the people, or what is the electorate saying?” Dr Akwetey said.

“Now when you look at our situation, I think we haven’t been here before but given the nature of our politics where “winner takes all” has gotten to us over the last four years. The way parliamentary majority was used to approve policies and so on; then the will of the people or their wish is probably is that this time around, no “winner takes all” business. This time; we have to do business together.”

He said with Ghana’s Executive Presidency system, there would be the need to find bipartisan basis for driving through Government policies, which would require negotiations to see what could work together.

Dr Akwetey indicated that there had to be formal agreements that would ensure that that the President’s decision got through easily.

“So, it’s a new thing but it will involve some negotiation in tradeoffs.”

The Executive Director said that could be termed co-governance, adding that “Assuming that NDC goes to court and the representation in Parliament changes, assuming they have the majority.

“It is even more difficult for the President to govern or to get his policies through if we have an NDC majority.

“But what does the electorate wants and what are they saying,” he asked.

“So they have to be very creative in how they agree to work, even if the situation is confirmed as it is, still having one or two people, that difference doesn’t make much, because you never know who would not be in the house at a given time, either because they are not well or travelled.

“So whatever it is, it is time to talk on how ‘winner takes all’ kind of parliamentary situation will now shift to where they debate the issue they agree, they find a common ground, the tradeoffs, the compromises and how the opposition is taken seriously. There have to be some conversations, some negotiations, some agreements on the table for that.”

He said the composition of the next Parliament was good, stating that “we are going to see a lot of accountability

Prosecute Ajumako Enyan Essiam DCE, others who assaulted me – Policeman

Feature: Is The End Near For M7? Wine Has Been Museveni’s Biggest Challenge Ever

The Time Is now – Let’s Make It Happen