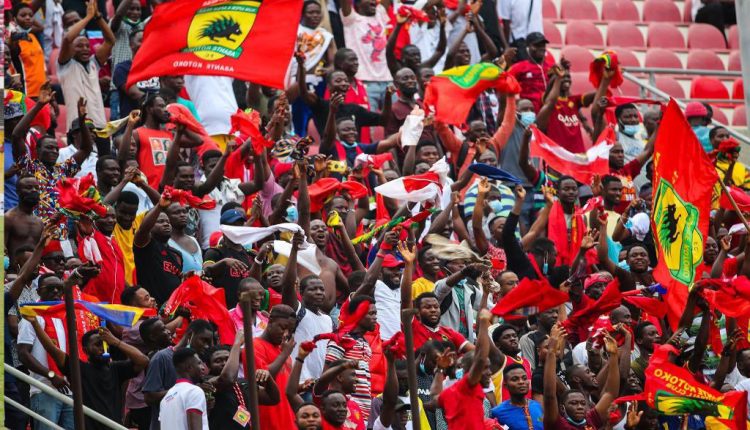 It was an embarrassing moment at the Baba Yara Stadium yesterday during the second leg of the African Football (CAF) Champions League round between Kumasi Asante Kotoko and RC Kadiogo.

The win would have qualified Asante Kotoko for the next round of the competition.

Fans of the Porcupine Warriors hooted at their own players after their elimination from the CAF Champions League.

The angry supporters had to wait at the stadium for hours after the match because they were unhappy with their team displaying an awful performance at the Baba Yara Stadium.

The management had to spend unusual time with the players in the dressing room after getting pieces of information about the unfavourable conditions in the stadium.

Their appearance attracted an unexpected reaction from the fans shouting and hooting them for disgracing them despite their die-hard support.

Some supporters said management allowed a small team like RC Kadiogo to eliminate Kotoko in front of a massive crowd.

It took the presence of security to protect the players as they made their way into their bus.

They chased the bus when it took off and continued to verbally assault the team.

Others blamed and criticised the CEO, Nana Yaw Amponsah claiming the loss was primarily from him.

In fact, some fans have already asked him to resign after failing to qualify Kotoko for the second time in the CAF Champions League.

The visitors managed to advance the match to a penalty shoot-out after Kotoko conceded an early goal in the first half of the tie. The shoot-out ended 5-3 in favour of RC Kadiogo.

Over 15 Million Ghana Card Issued To Ghanaians And Non-Ghanaians