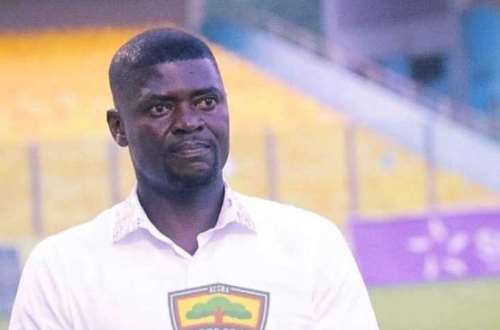 Head Coach of Accra Hearts of Oak Sporting Club, Mr. Samuel Boadu has allegedly threatened to quit his job at the club over alleged match-fixing. Match-fixing in top flight football has become a major canker.

Ashgold and Inter Allies have been demoted to Division Two after playing a fixed game during their 2020/21 Ghana Premier League at the Obuasi Len Clay Stadium.

It would be recalled that after the matchday 32 game between Hearts of Oak and King Faisal – where the Phobians lost all the three points, the gaffer , Samuel Boadu was left weeping as he suspected his players of playing a fixed game.

However, in less than two weeks, Hearts of Oak have again lost to another relegation threatened team Eleven Wonders at the Ohene Ameyaw Park in Techiman on Tuesday, June 8, 2022 by two goals to one.

Hearts of Oak had the better start of the two teams, scoring in the 12th minute through Kojo Obeng Junior. Wonders tied the game 1-1 before halftime thanks to Mohamed Nortey Tetteh’s goal.

Wonders pushed for the winner after the break and were rewarded in extra time when Sumaila scored to send the fans into a frenzy.  Hotfmghana.com is reliably informed that Coach Samuel Boadu became peeved over the loss after the game.

According to sources, Samuel Boadu again suspected his team of fixing the match. Sounding extremely disdained, Mr. Boadu is alleged to have threatened to quit his job as the head coach before the end of the season.

With two matches to end the 2021/22 season Premier league, Hearts will play against Accra-based Great Olympics and RTU at the Accra Sports Stadium.

Hotfmghana.com is reliably informed that Samuel Boadu is likely to announce his resignation as the head coach of the team before these matches . Hearts are currently lying fourth on the league table with 44 points.

Samuel Boadu signed a 3.5 year contract with Hearts on 1 March 2021. He was given a task by the board of the Club to win the Ghana Premier League in his first full season. In just a Year, Boadu has won the league title, FA Cup and the President’s Cup .