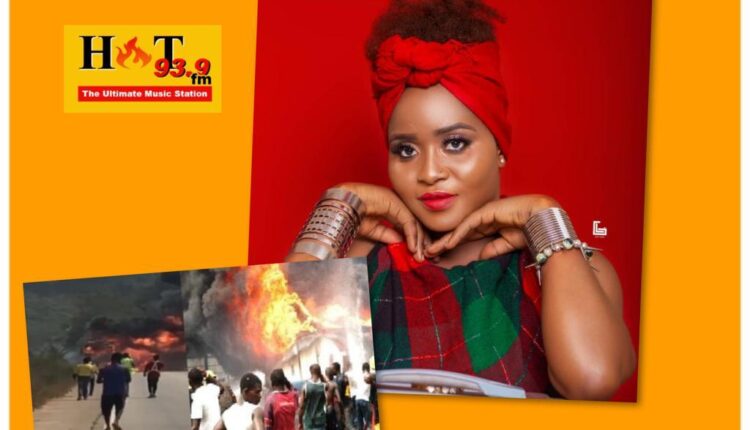 Ghanian Highlife artiste, Nafisatu Kassim popularly known as Naf Kassi who is also from Bogoso has consoled the families of victims of Thursday’s explosive explosion at Apiate- a town around Bogoso in the Western region.

Apiate, a community in Prestea Huni-Valley, was destroyed when a mini cargo carrying explosive exploded while the driver tried to save a motor rider.

Eye witness say’s the fire that gutted the motorbike contributed to the explosion which has left many dead and scores injured .17 people have so far been confirmed dead by the health officers in the area.

Over 59 others are being treated at the Hospitals in and around the Bogoso municipality for various injuries. Consoling the families of the victims via twitter , Naff Kassi who is a native of Bogoso said:

“My thoughts and prayers are with the victims and families of those affected by last night’s Explosive Explosion at Apiate near Bogoso. I feel their pain. In our own small way, let’s all extend a helping hand to all those affected by the sad incident,” Naf Kassi tweeted.

Naf Kassi who is regarded as the most successful female artist from Bogoso is well-noted for hit songs such as “Obra, Odo Pa ,Me Mbo Tuo; Special Feeling,Odo, Famame.