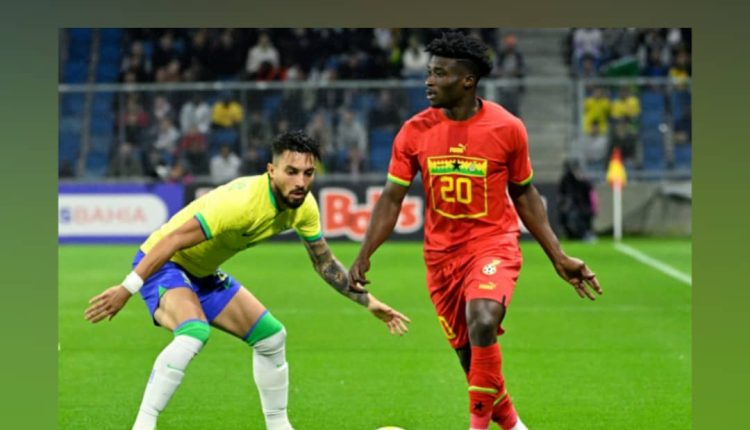 Accra, Ghana – In Nima, Mohammed Kudus has the status of a god. In the dense Accra neighborhood, he calls home, there is pride in the voices of the locals when his name is mentioned.

The fans of his club, Ajax, know him for scoring goals, dribbling, creating chances and, on occasion, displaying some cheeky skill on the football pitch.

However, to the people of Nima, he will always be that skinny, innocent-looking boy who wowed them with his magical left foot in the rugged Kawukudi Park for years.

An episode from his time there with his boyhood club Strong Tower FC is fondly etched in the minds of many of his hometown fans.

During a high-level youth friendly against Powerlines FC, 11-year-old Kudus carried the team on his shoulders, dominating the game and displaying innate precision rare in footballers his age. In the end, he scored all six goals as Strong Tower drew their opponents 6-6.

To this day, the memory of the young star beating his opponents that day in 2011 continues to be a beloved anecdote in these parts.

“The first time I saw Kudus play on the lane and I immediately saw a good player in him,” says Joshua ‘Ayoba’ Awuah, Strong Tower’s manager, who discovered Kudus and set him on the path to greatness.

“I invited him to my training camp, and he was fantastic from day one,” said Awuah. “I named him ‘the best in the world.’ He was only 10 years old when I met him, but his quality of him was clear.”

Nima, a slum community in Accra, is generally associated with gangs, crime, and drug abuse. Until recently, anyone born or raised there was stereotyped as bad company.

In recent years, several of its residents have challenged these stereotypes, including President Nana Akufo-Addo and Kudus, who have been using soccer to light up the neighborhood.

King Osei Gyan, director of the Right to Dream Academy in Akosombo, in eastern Ghana, where Kudus finally left, “represents the next generation of the best talents in Africa who know their worth and will fight for it and They will defend it.” it’s”.

The athlete’s willingness to combine soccer with education also helped his advancement, those who know him said. Young Kudus was talented on the field and brilliant in the classroom. One thing that helped him do both was a soccer tournament in Nima organized by a non-profit organization called Books and Boots.

The NGO specifically targets communities facing poverty, crime, drug abuse and teen pregnancy to use soccer to encourage children to embrace a culture of reading.

Nima ticked all the boxes.

“Kudus must have been around 12 years old and very small,” recalled Yaw Ampofo-Ankrah, executive director of Books and Boots. “He wasn’t necessarily a standout player, but he had the skills. Apparently, he crossed the street from Nima with his brothers and cousins ​​and played”.

All of that experience taught the 33-year-old to see that Kudus had the right mix of attitude, football ability and hard work, traits that Gyan says have made him the player he is today.

“From day one, Ayoba kept saying whether Kudus would become the best player in the world,” Gyan said. “For me, the connection was his ability to try things, to pass the ball over people’s heads and try to create things in the game and make a difference.”

Of his many fond memories of Kudus’ time on Right to Dream, one stands out, from a division two game.

“You know how the lower division games are in Ghana with grown men,” Gyan said. “If you lose the ball, don’t lose the man. Kudus was around 16 then, but what made him special was his technical ability, which was so high against the men, and he had that kind of grace to keep competing physically and not necessarily get dragged into any fights or irritations, despite constantly getting kicked around, and still be the best. It said a lot about him as a teenager.”

Kudus was a key member of the academy team that went unbeaten during their European tour, winning four trophies, including the Nike World U15 Premier Cup.

“He was very difficult to play against,” said Emmanuel Ogura, Kudus’ former teammate on Right to Dream. “It was very scary because he always wants to haggle and create something. I look forward to seeing him stand out more.”

When FC Nordsjaelland called in 2018, Kudus was ready to take on the world. Just days after his 18th birthday, he became the ninth-youngest debutant in Nordsjaelland’s history and went on to score 11 goals in his only full season with the club.

transfer to Ajax and has grown in both status and mindset ever since.

In 2020, Italy’s Tuttosport newspaper nominated him for their Golden Boy award for being one of the most impressive youngsters to play in Europe that year.

Although nagging injuries blighted his first two seasons at Ajax, he has finally returned to fitness and is playing the best football of his career.

New manager Alfred Schreuder has fielded him as a false nine, rather than his favourite playmaking role. Still, the 22-year-old has shone, scoring 10 goals and two assists in all competitions this season, including four goals in the UEFA Champions League.

Such has been Kudus’s rich vein of form that Liverpool manager Jurgen Klopp described him as an “incredible” player. French legend Thierry Henry was also impressed, saying: “He came from Ghana’s Right to Dream academy, and he’s living the dream.”

For Ghana, Kudus has also become a key member of the Black Stars since scoring on his international debut against South Africa in an AFCON 2021 qualifier and appears to influence the Qatar 2022 World Cup.

A torchbearer, an idol

In Nima, his story continues to inspire many people, and he often visits his childhood club, Strong Tower, to donate boots and other items.

“Kudus now doesn’t just belong to the family, it’s for everyone,” said his uncle Abdul Fatawu Alhassan. “When you enter Nima, they call him ‘The Pride of Nima’, and we are happy that he will represent us in the World Cup.

“He is also a great inspiration for children, not only for future footballers. Many see him as a role model. A few years ago, he was with them here, so when they see him playing for the Black Stars, in the UEFA Champions League and scoring goals, he inspires them to know that they can do it too.”

Nine-year-old Ramadan Osman, who trains frequently at Kawukudi Park in Nima, echoed Alhassan’s sentiments. “I am a number 10 and I want to be the next Mohammed Kudus,” he declared confidently.

His friends and family say he remains grounded in reality, but on the court, he displays the kind of arrogance and temper that many of the best players have in their locker rooms.

Gyan, who has closely followed Kudus’ soccer odyssey, attributes this to

“In terms of personality or character, I will say that Kudus brought Nima with him,” he said. “Nima’s positive spirit: They are known to be stubborn people. It is that stubbornness balanced with flexible and applicable methods to achieve success.”

More than 30 million Ghanaians will be cheering for Kudus and Black Stars in Qatar, but the loudest hurrah will probably come from Nima. While the world sees Kudus as a talented playmaker, they see him as so much more: a torchbearer, an idol. 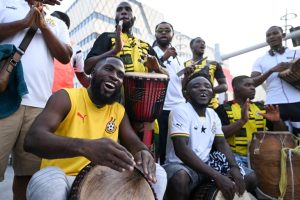 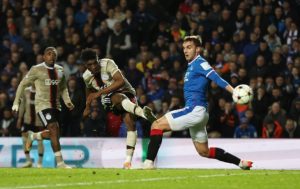