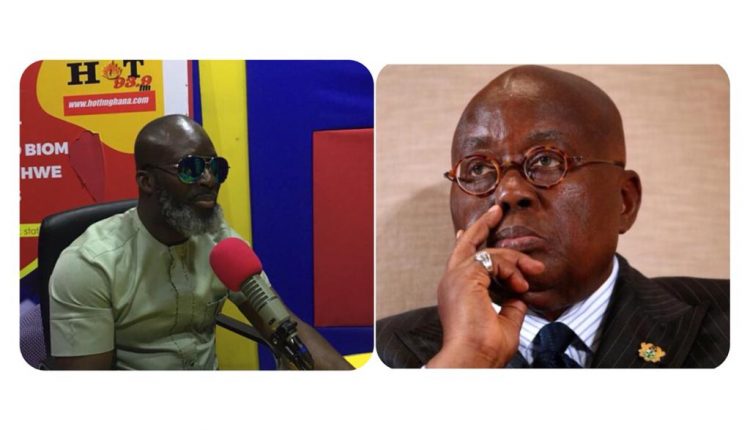 The Founder and Leader of Heaven’s Gate Ministries, Nicholas Osei, popularly known as Prophet Kumchacha, has accused President Nana Addo Dankwah Akufo-Addo of being spiritually unapproved to lead the country.

It would be recalled that some party leaders of the NPP including President Akufo-Addo and former president John Agyekum Kuffour while addressing a multitude of party supporters at the Jubilee park in Kumasi on Sunday, December 2, 2012, had their stage crumbled, leading to the fall of the leaders who had graced the campaign stage.

Akufo-Addo, who was the flagbearer, was the one addressing the Supporters when the stage caved in. The incident happened barely five days before the 2012 General elections in Ghana that witnessed the incumbent President, John Mahama as the Winner of the presidential contest with 50.7% of the votes.

Speaking in an interview on “Dwene Ho Biom”, a political talk show hosted by Agya Wusu on Accra-based Hot 93.9FM, Kumchacha stated that the way President Akufo-Addo took a tumble when the stage he was addressing the crowd caved in was a sign that he is not spiritually approved to be the President of the nation.

“Some people said the fall was deliberately orchestrated but that is not true anyone in his/her right senses would know that the caving in of the stage was not physical, but rather, spiritual”, Kumchacha alleged.

According to Kumchacha, the current unsatisfactory state of the economy is because Akufo-Addo is spiritually unapproved to lead the country.

The outspoken prophet who has currently formed his own political party  KUM 1 Party, alleged that Akufo-Addo had been cursed but used his own will to take power when he knew he was not the right person to lead Ghana.

Be Careful Of People You Associate With- Judges Advised