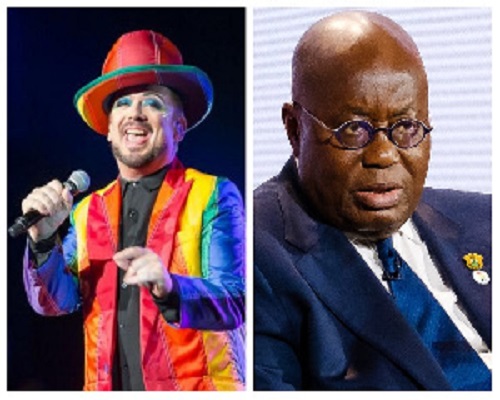 Despite same-sex relationships among Ghanaians being stiffly opposed, there is a renewing call on President Akufo-Addo by a British singer and gay activist to reconsider legalizing gay relations.

Boy George as he is known, has revealed the composition of a song whose lyrics call for gay rights, in a bid to woo Ghana’s President to recognise and accept gay and lesbian people in the country.

Having unnatural canal sex is punishable by imprisonment and considered to be against the socio-cultural and religious norms and teachings in Ghana and hence, the latest move may most probably attract controversy and some rejection by majority of Ghanaians.

In a video currently circulating via social media, the singer, Boy George, who is also a gay rights activist and a part of the LQBGT+ community is heard singing excerpts of his composed song for President Akufo-Addo.

“Well, there’s still work to be done and I have worked on this on Ghana because there’s a lot of persecution of LBGQ+ people in Ghana so I have done a song where I am singing to the president and I have used his name Nana Akufo-Addo in the song,” he explained.

The host of the programme however asked Boy George if President Akufo-Addo may have already heard the song, to which he replied, indicating hope., “I hope so”

Watch the video below: