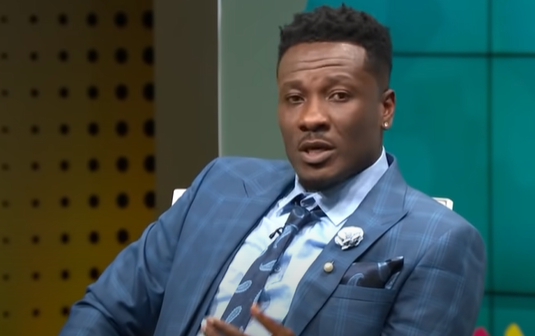 One of the most anticipated sports autobiographies in Ghana’s recent history was launched on Saturday.

‘LeGyanDary’, by former Ghana captain Asamoah Gyan, will hit the bookshelves this month after a star-studded launch led by the President of Ghana, Nana Akufo-Addo.

In the book the former Captain of the Black Stars spoke about his first love. He takes us back to when he was 14 – and fell in love.

According to Gyan,”I continued my education at Seven Great Princes Academy and indeed, it was during my school days, that I met my first love. I was walking to my class. I hit my foot against a stone and almost tripped. When I stabilized I turned to look at the rock when our eyes met. You could say it was love at first sight. The curve of her brows, the glint in her eyes, the smile that drew on her face; I knew she was the one. We locked eyes for what seemed like an eternity till a friend of mine interfered.

I later looked for her and we established a rapport immediately. We started talking and after some time we grew very close. She was the light of my world and the excitement of seeing her every day was enough to ginger me get to school. Love was sweet and beautiful with her. We could smile at each other during morning assembly and sometimes I would blow her a kiss when no one was watching. I was fourteen and in love!

In fact, we were so in love and could not keep away from each other. After school, I’d walk her home, then she’d also walk me back to mine. We could go on like that till we grew tired of walking and sit down to chat into the night, without regard for the time. We were young and in love. One of those extended hours led to her Dad giving her a severe beating when she got home late. My heart missed a beat when I saw her with scars on her hands and her back.

In my anger, I decided to see her father, a man reputed to be very strict and brooked no-nonsense. It was not beyond him to cause damage to any man who got too comfortable with his daughter. And it certainly was not difficult to imagine what he could do to a smallish, 14-year-old boy who dared keep his daughter out at odd hours. My lady love pleaded with me not to see her father. Of course, I didn’t listen.”