Mentally-Challenged Woman Is Not Mother Of The Deceased – Family 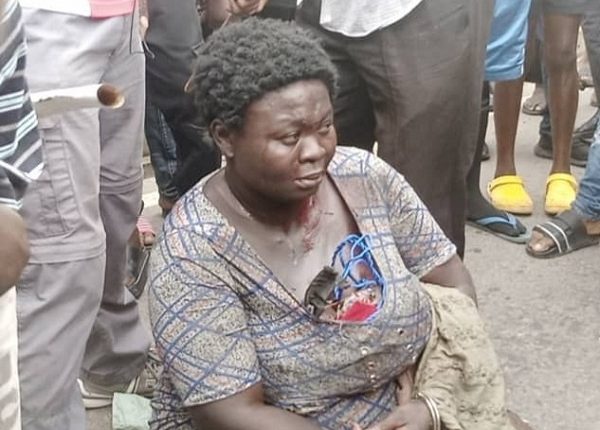 Family of the young man stoned to death at Kwame Nkrumah Circle has refuted claims that the mentally challenged woman is the deceased’s mother.

This comes after reports suggested that the deceased is related to the woman at the centre of the incident.

The Officer-in-charge of the Kwame Nkrumah Water Gardens, Emmanuel Kwasi Afful, had disclosed that the young man claimed that the said woman was his mother.

“After we managed to rescue him from the mentally-challenged woman, another young man came into our corridor and told us that the said woman is his mother and he wants to take her away. He was in a pair of trousers and a striped shirt.

“…We advised him to get about five more people to assist him to restrain the woman since he can’t do that alone. By then we had managed to drive the woman away.”

“The young man [in a stripped T-shirt] followed the mother to the MTN office around Paloma and returned. As to what happened that led to his death, I don’t know”, Mr. Afful narrated on Angel FM’s Anopa Bofo Morning Show.

However, Angel FM sources have contradicted Emmanuel Kwasi Afful’s claim about the relationship between the two; the deceased and his ‘killer’.

Angel FM’s Court Correspondent, Ama Brako Ampofo, reported from the scene of the incident that the deceased identified as Kwabena Amoani is a 19-year-old who hails from Breman Kuntenase in the Central Region.

His relatives told Angel News that his mother’s name is Kukuwaa and she has been looking for her son for about three days now.

“He doesn’t stay in Accra but occasionally travels to Accra to trade and return home after making some money. His friends told the mother that he left home for Accra about three days ago when his mother enquired about his whereabouts. However, he didn’t visit any of the relatives upon arrival in Accra…”, Ama Brako Ampofo reported.

“The aunty who trades at Kaneshie upon learning of a man being stoned to death went to check and called home only to be told Kwabena Amoani is in Accra. The family says they have no knowledge of who the mentally-challenged woman is.”

Utility Tariffs To Go Up Next Week; New Rates To Take Effect September 1